The AS Bass Collection is a bundle of 6 Bass instruments - A jazz bass, a upright bass, three Musicman Stingray basses with different strings & articulations and a five string ibanez bass. You save up to 50% when buying this bundle! 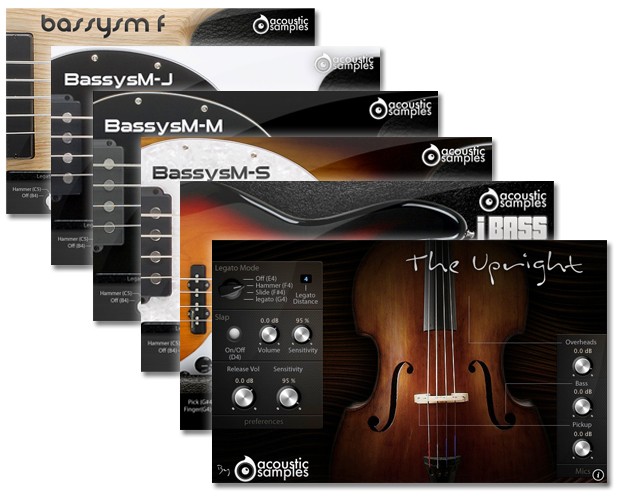 JBass is a four strings american Fender Custom shop Jazz bass with flatwound strings. The very first Jazz Bass was made in 1960. It was made to accompany Fender´s new guitar at the time, the Jazzmaster. The neck on the Jazz Bass were longer and narrower than any of Fender´s previous models. This new design was intended to mimic the feel of the stand-up bass. Even the new mid tones that the guitars could produce were made with jazz musicians in mind. The sound of the Fender Jazz Bass has been fundamental in the development of signature sounds in certain musical genres, such as funk, disco, reggae, blues, heavy metal and jazz fusion and is now used in almost any genre.

The Upright is a Chinese 4/4 four strings Upright bass (double bass) recorded from three microphone perspectives, a pair of overheads, one next to the F-Hole and the pickup. These three microphones perspectives allow you to shape the sound to give it more bass, roundness or detail (finger noises).

The Bassysm-J bass is a four strings Musicman Stingray bass with roundwound strings played with the fingers.

The BassysM-S bass is a four strings Musicman Stingray bass with roundwound strings. The is the slapped version of the BassysM line.

The Bassysm-F Fretless bass is a five string ibanez bass with roundwound strings.