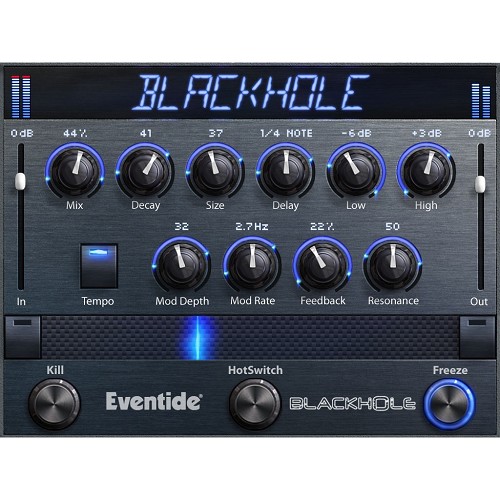 (8)
€ 189,-
$ 173.28
£ 169.18
hear
see
Update Required To play the media you will need to either update your browser to a recent version or update your Flash plugin.
Related products
Ratings
Requirements

Blackhole is a massive reverberator that has evolved over the years by pulling in mass quantities of time and energy (of the development persuasion, of course). In its earliest incarnation – first in the DSP4000 and later in the H8000 flagship processors - it was regarded, by some, as a secret weapon. Recently it was tuned, expanded and enhanced and then unleashed in the Eventide Space stompbox. Now, it´s available as a Native plug-in.

Blackhole may not be your first choice to simulate an enclosure on the surface of the earth but, if you’re at all interested in ‘sculpting sound´, Blackhole just might pull you in. From our vantage point, its possibilities appear to be endless but, of course, we can’t see beyond its event horizon.