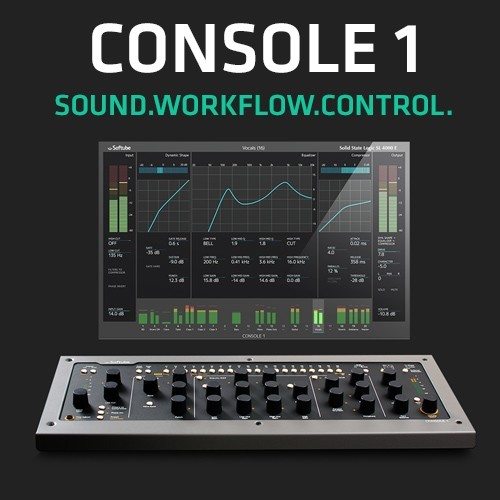 Softube Console 1 MK II is the next generation audio mixer. Used together with any major DAW, Console 1 will not only give you the analog sound that Softube´s plug-ins are world famous for, but also the analog workflow of using physical knobs and buttons when you mix. Console 1 MK II is all about great sound and intuitive, hands-on control.

Included in the Console 1 MK II package is Softube´s model of Solid State Logic SL 4000 E—one of the most classic and widely used analog consoles in the world. The channel strip includes the coveted black knob E 242 equalizer, the classic channel compressor, the musical expander/gate and the sweet high and low cut filters from that channel. Also included is a model of the harmonics, distortion and non-linearities obtained from overdriving the SL 4000 E console, which can be used to add analog distortion across the entire mix for that coherent "glue" sound. Adding to that is Softube´s own Transient Shaper, which is not a part of the SL 4000 E console or any other analog unit for that matter.

Now compatible with a huge selection of UAD Plugins!

For the perfect control of the sound and dynamics processing, a hardware controller, connected via USB to the computer is provided. It allows an analog operation of the mixer software without the user having to resort to cumbersome mouse control. From loading the plug-ins to the precise control - the mixture is considerably simplified by the intuitive user interface.

You can now not only take control of the Console 1 plug-in, but the DAW itself, streamlining your workflow further than ever before. Track selections, pan, sends, and more can be handled hands-on from your Console 1 hardware.

Full integration with Cubase and Console One

In Cubase, it’s now possible to control DAW track selection, solo/mute, volume, pan, send levels and more, directly by hand from the Console 1 hardware. The new integration is a free upgrade with Cubase Pro 9.5.10 and the latest version of the Console 1 software.