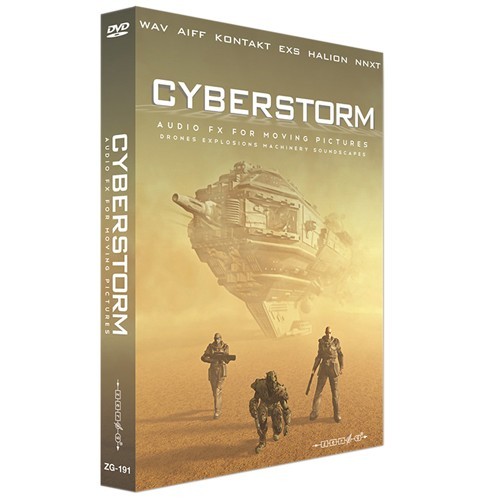 Cyberstorm is the latest library by film and games FX supremo Frederic Devanlay. Fred has produced the special effects and atmospheres for some of the best known games and movies and is constantly in demand for his creative talents. The contents of this library prove why. This may well be the hardest hitting sfx library on the planet. Be warned though, the content of this library is not for the faint hearted!!

Cyberstorm is a huge toolbox of soundscapes, movements, drones, impacts, weapons, voices, whooshes, hits, servos, explosions, and lots more. It can be used in many different film and game genres especially action, fantasy, science fiction, horror and war as well as for TV soundtracks, advertising, video and EDM.

The Cyberstorm concept is all about future robotic warfare with intense mech versus mech combat, close quarters battles and epic futuristic sci-fi action effects. All the weapons of the near future battlefield are utilised from autonomous battlefield robots, main battle tanks, powered infantry to unmanned drones.

The library contains 1300 samples in both Acidized Wav and AIFF file format all recorded in stunning 24bit using high fidelity source materials and a large-soundstage production approach. EXS24, Kontakt, HALion and NN-XT instruments are also included for ease of use in adding the sounds to your favourite sampler.

If you’re a composer and movies such as Transformers, Battleship and Pacific Rim are your “thing”, then this library will not disappoint. A great buy.

A meticulously detailed library of superb robotic and futuristic warfare sounds that should be an essentiaö purchase for anyone working on sci-fi action or sci-fi horror projects.