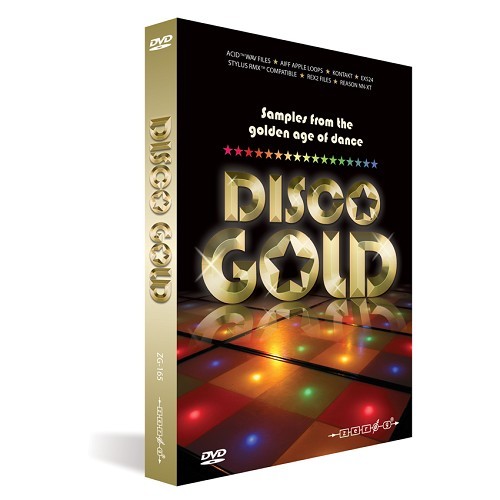 Disco Gold contains 34 construction kits that evoke the greatest period of dance music from funky disco and smooth soul to britfunk, disco underground, proto-house, hi-nrg and much more. In addition to the totally authentic sounding construction kits there are dozens of extra guitar, bass, piano and synth loops.

Disco Gold has all the classic sounds of the seventies and eighties but this time the bpm is a bit faster and the tempo is a little more upbeat to match the modern dance producer´s needs. The great sounds of Chic, Quincy Jones, George Benson and D-Train to name but a few are packed into long construction kits that have been immaculately researched, written and recorded to give you the most authoritative collection of disco sounds ever compiled in a sample library.

The producer and multi-instrumentalist Davor Devcic aka D3 writes:

"This time I´ve been focused on sound and diversity. I have attempted to bring you a whole spectrum of dance music history from circa 1977 to 1989. I analysed original recordings from that great era and tried to emulate the analog warmth, the space and the dynamics of those vinyl records. Of course, without any trace of today´s loudness-madness!
And finally, the diversity. On this library you´ll find creamy Shakatak and George Benson jazzy funk, early Bobby Brown or Freddie Jackson 80´s swing, Jimmy Jam-Terry Lewis electro-soul, "around-1981" disco rare grooves, Italo-Jaques Petrus lightness and, of course, classic Philly Disco, Salsoul and the famous Chic sound. There are lots of individual loops which are great to start your own funky disco journey.
I hope that you enjoy it as much as i did making it"