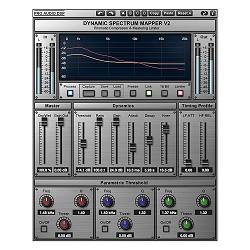 € 329,-
$ 312.02
£ 295.85
hear
Update Required To play the media you will need to either update your browser to a recent version or update your Flash plugin.
Related products
Requirements

The DSM V2 plugin was developed by Pro Audio DSP’s Paul Frindle, developer of some of the most respected and beloved products in recording, including the SSL E and G-series analog consoles and the SONY OXFORD OXF-3 digital console. Mr. Frindle is recognized as one of the most innovative designers in the recording industry.

The DSM V2 is not only powerful; it’s also one of the most flexible dynamics processors you’ll ever use. For example, to use the DSM V2 as a de-esser, just capture a few seconds of your vocal track where there are no “esses”. The DSM V2 can then apply that captured frequency and dynamic information to the rest of the track, thereby reducing the “esses” to match the captured section. Fast, easy, seamless.

To even out the dynamics of a mixed track during a mastering session, simply capture a few seconds of the loudest part of the track and then apply those dynamics and frequencies to the rest of the material, making it instantly “louder” while maintaining the source’s original character.

The DSM also includes a single-button Limiter function. The Limiter has been optimized to work with the DSM’s compression stage. The Limiter slams the door on short-term peak events in the program to prevent overs with no loss of punch, while retaining complete transparency for signals below -1dBFS.