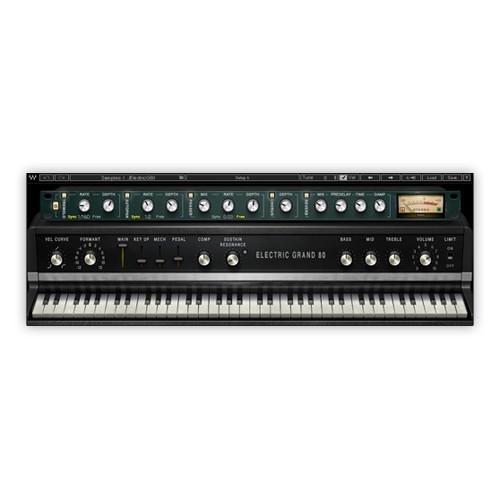 Electric grands are known for their reverberated chords and polished, shiny leads. Since the original piano uses fewer strings per key, it creates a tone that can be more easily mixed into your music compared to traditional acoustic piano. The Waves version brings to life this electro-acoustic sound, with features from the original such as tone controls and tremolo. Also included is Sustain Resonance, which controls the simulated sympathetic resonance of un-played strings – perfect for adding depth to long chords and solos alike.

The instrument’s mixer section lets you blend four separately sampled sounds from the original piano: the main sound, the key up, the internal mechanics and the sustain pedal. With high-quality effects plus a studio-grade compressor and limiter included, you now have everything you need to play Electric Grand 80 in the studio or live on stage.