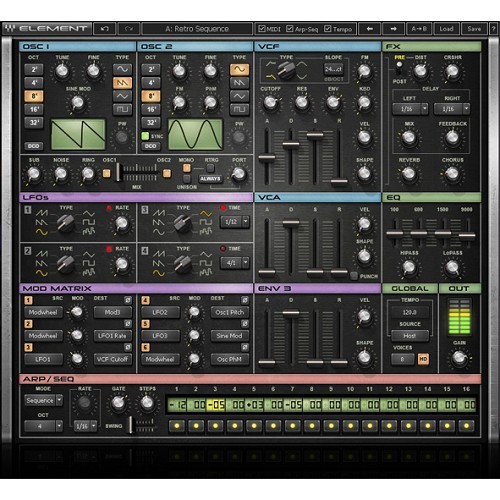 Element 2.0: The first ever synthesizer from Waves.
Powered by Virtual Voltage™ technology, Element 2.0 is an analog-style polyphonic instrument engineered to deliver the fat, gritty sound of the classics, with all the precision, flexibility and control of contemporary digital synths.
Version 2.0 includes hundreds of new presets and newly designed effects – perfect for studio and live environments.

Element includes a vast array of convenient features and functions. Like integrated effects. A 16-step arpeggiator / sequencer. MIDI Learn for all controls. And a massive preset library, with total tweakability. Plus, all parameters are laid out right there in front of you, so when inspiration strikes, there’s no need to scroll through page after page to customize your sounds. Searing leads, booming basses, ethereal pads, electro-percussion, sequential motions, mind-blowing FX and lots more: Element does it all.

"This is gonna be awesome on the new Dream Theater album. Within no more than two minutes of playing Element, I knew that it was really great! The quality of the oscillators and filters, along with the depth of the modulation parameters, make it really top-class. I can’t wait to get in the recording studio and start using it!"
Jordan Rudess

Global and Out Sections