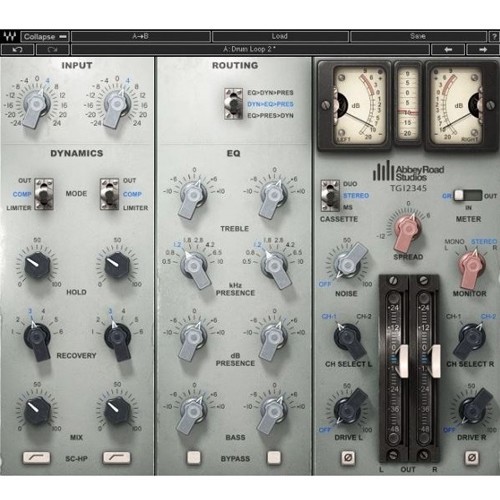 Virtual Channelstrip with a Compressor and EQ

Thanks to meticulous component modeling, the Waves/Abbey Road EMI TG12345 channel strip plugin captures every celebrated feature of the one-of-a-kind original console: the input mic preamp, down to every last detail of its harmonic distortion, hum and noise; the bass and treble EQ bands from the mic cassette; the presence EQ band from the console's group/main section; the lush-sounding spreader; and to top it all off, the console's famous compressor/limiter, with its distinctive, irresistible sound.

The plugin offers routing options that cover the entire TG12345 line, from the one and only MK I desk on which it was modeled, to the final MK IV models.

In addition to the console's original features, new elements have been added to accommodate modern mixing needs, including a high-pass filter on the compressor's sidechain, a mix control in the dynamics section for easy parallel compression/limiting, a drive control, and much more.

Whether used for tracking, mixing or mastering, in the studio or live, on an individual channel or on a master bus, the Waves/Abbey Road EMI TG12345 will give your mixes the beautiful compression and the unforgettable crisp, bright and rich sound of a true classic.