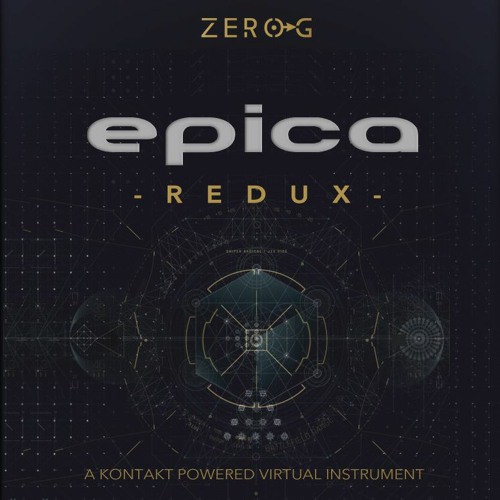 Epica Redux has been produced by Sam Spacey who also produced the highly-acclaimed Phaedra and Epica Bass virtual synths. Epica Redux replaces the previous version which ran in the free Kontakt Player and required an activation serial. Epica Redux requires the full version of Kontakt 6.6.0 and will not run in the free Kontakt Player. All of the sounds from the original Epica are available in the updated version. The main difference is the updated Kontakt GUI.

Epica Redux comes with a stunning interface that gives the user amazing sound-shaping capability. Over 17,000 24bit samples have been hand-edited, looped and multi-layered to produce an unsurpassed richness and authenticity of sound that will have your audience gasping in appreciation.

Zero-G made some great presets to get you started, 600 single instruments and over 100 multis in total. You will love how they instantly sound part of your song with no EQ or Compression needed, they sound for want of a better phrase "Warm, real just like a record". Epica sounds like...well...Epica, it is unique in its tone and versatility offering sounds that you just cannot get with other synths.

Epica Redux's samples have all been recorded through an equipment chain of 100% boutique hardware with no plug-ins used in the creation of the source sounds. Creatively offering a fresh palette of sounds that are rich in timbre and have their own character, you're really able to set your music apart from the masses. All samples were hand looped and with Kontakt key mapping never stretching a sample more than 1 note from its root they sound as real as the instruments they came from. In fact, all of the non looped samples are mapped to every key for 6 octaves with a large amount of them 3 to 4 x Round Robins on every key.

The sound of Epica Redux is rich, full and 'Real', they just fit into your projects ready to go.Zero-G have always found that virtual synths need a lot of work to make them fit into mixes, to their ears they always had this plastic two-dimensional sound to them. Epica instantly sounds like it has come off a record from the beginning as the sound sources are from real hardware instruments and 100% hardware processors. You will find yourself not reaching for the compressor, eq or other plugins as they just sound so good on their own.