"Marcel Barsotti's EW6 is a wonderful collection of ethnic vocals and instruments. It is as inspirational as it is impressive in its scope and user friendly design."

"With Marcel Barsotti’s EW6 I was immediately inspired. As my hands touched the keyboard, ideas flourished and music flew from my fingertips.
Beautifully sampled and incredibly deep. Exploring the collection is like a crash course in Ethno Musicology."

"Just a note to let you know Ive been using Ethno World 5 quite a lot recently and find it just amazing, be it the licks or the playable instruments.
My whole new set “Prince of India” uses instruments from EW-5. That library is just an endless source of inspiration! Thanks a lot for this work!"
Bruno Cariou 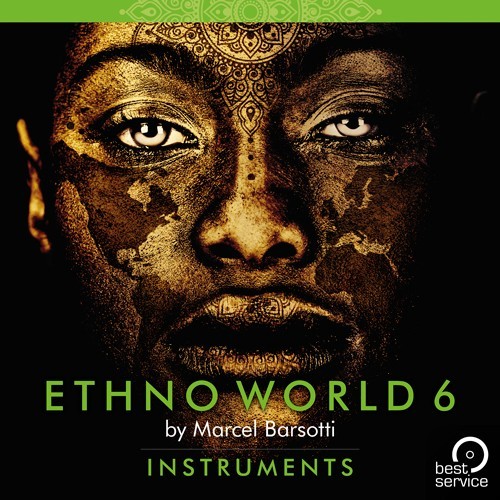 (23)
€ 259,-
$ 259.00
hear
see
play
Update Required To play the media you will need to either update your browser to a recent version or update your Flash plugin.
Related products
More Info
Ratings
Awards
Endorsements
Requirements

ETHNO WORLD 6 Instruments is the summit of a library that has continuously been growing and improving for over 16 years. In this sixth edition, numerous new instruments with a volume of several gigabytes have been added to the library.

Award-winning film composer Marcel Barsotti (e. g. Pope Joan, The Miracle of Bern) has gathered a gigantic selection of instruments from all over the word from widely varying cultures.

ETHNO WORLD 6 Instruments now consists of 264 instruments, with roughly 620 patches, 10 construction sets and 5 shaker sets. For the most authentic sound, the instruments were recorded with different play techniques that can easily and precisely be accessed from the patches via key-switches. The library consists of 24.7 gigabytes (uncompressed) of sample data and 23,559 samples. All instruments come in 24 bit and 44.1 kHz.

Over 70 musicians from all over world were involved in the recording process, conducted by music-producer Andreas Hofner. The recordings took place in different local studios with the use of first-class gear such as microphones by Neumann and Brauner, SPL preamplifiers and converters by RME.

ETHNO WORLD 6 Instruments comprises an incredible spectrum of instruments from the most diverse regions of Asia, Africa, Europe, North- and South-America. Here, you will find the perfect instruments for folkloric, ethnic as well as for modern music.

For a detailed listing of all instruments and please go to "More Infos".

The library contains an extensive selection of stringed, plucked and bowed instruments, as well as the most different woodwinds including numerous flutes and, of course, a large selection of drums and percussion.

Alongside film-score-proven taikos and big ethnic tom drums, there are hundreds of inspiring loops and even an entire "Gongs, Bells & Metal Type Instruments" category - ranging from the large big feng gong to delicately sparkling wind chimes. New in ETHNO WORLD 6 Instruments are some unique sounds such as the two meter spanning gong by Paiste, several new percussion-instruments and a waterphone.

Almost all sections of the predecessor have been expanded once again. In addition, a couple of instruments of ETHNO WORLD 5 have been re-recorded. Among them is a new mandolin and a great sounding banjo, programmed with countless articulations and licks by one of Germany’s best banjo-players, Rüdiger Helbig.

Furthermore, you will now find a concertina, an autoharp, a Japanese koto, the aforementioned new mandolin with multiple play styles, a South-American charango, a bansuri, bass quena and an Indian flute plus additional play styles for the instruments launeddas, mancosedda, dvojacka and the Irish traverse flute.

With its selection of instruments, ETHNO WORLD 6 Instruments is the perfect library for film- and television productions that demand authentic sounds from specific regions of the world. Naturally, these instruments will work in music productions of diverse genres that embrace these specific sonic elements - from pop to ambient to dance.

A good number of special instruments were additionally recorded for version 6. Among them is the new “Gamelan” category. The instruments were recorded in Munich's Stadtmuseum and contain two different gamelan orchestras from Bali and Java, available in slendro, pelog and international tunings. Here, you will find more than 25 instruments such as kempli, kendhang drums, cheng cheng, bells, kecer cymbals, kethuk and kempiang.

For historical contexts, such as historic dramas or fantasy movies, ETHNO WORLD 6 Instruments offers a large selection of medieval instruments, among them a hurdy gurdy, renaissance lute, fife, doucaine, shawm, pasalterium, pump organ and a shruti box. In a nutshell: every instrument for songs about fire and ice.

ETHNO WORLD 6 Instruments uses the free Kontakt 5 Player by Native Instruments as its sample-engine and can of course be used with the full version of Kontakt 5, too. For the new version, the user-interface's graphic has been completely redesigned and optimized for ultra fast access. There are numerous editing possibilities as well as innovative functions. ETHNO WORLD 6 Instruments supports the Native Kontrol Standard (NKS), which allows tagging and interaction with the NI Komplete Kontrol keyboards and NI Maschine. 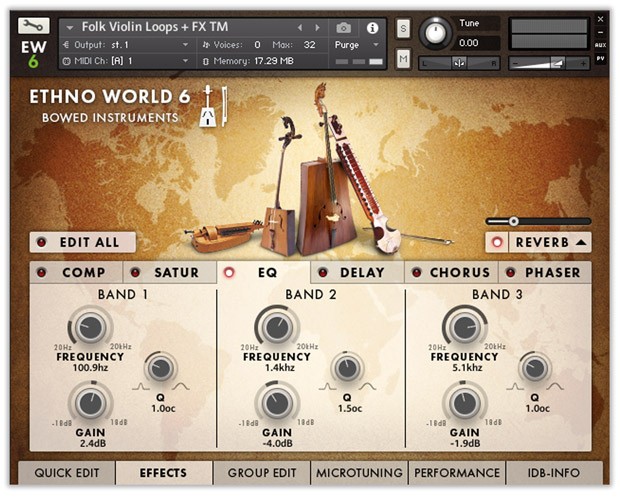 Further additions are a new waveform display, visualization of the sample-start-offset as well as a clearer use of the effects where, among other features, delay times are now displayed in tempo-related note values and milliseconds. The Timemachine (TM PRO) delivers significantly improved audio results with tempo adapted material, especially for polyphonic licks and loops. 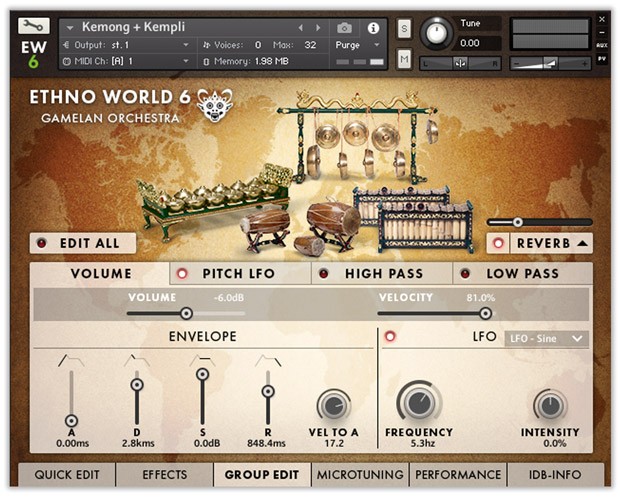 Thanks to the integrated convolution reverb, all instruments sound exceptionally realistic and natural. Solo instruments additionally offer a high-quality legato mode. Plus, the humanize mode will play each new note with a slightly changed timbre. The micro-tuning allows the use of multiple ethnical tunings and scales. By using top-quality filters, LFOs, tune, automation, harmonizer and further effects, all instruments and voices can be efficiently edited and manipulated if needed - allowing to create new sonic worlds equally suited for modern music genres and film productions. 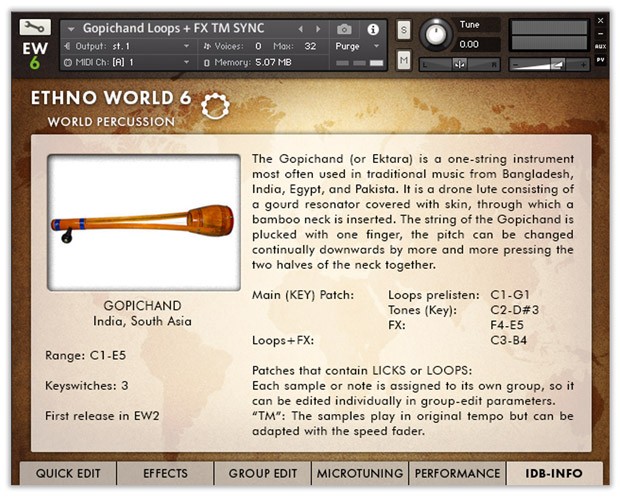 A unique feature of ETHNO WORLD 6 Instruments is the integrated IDB-INFO (Information Database), being directly available from every instrument. Via the menu entry "IDB-INFO", you can access photos of the instruments as well as many details about their original play techniques and tunings, origins and variations. You will also find notes on how to use key-switches, achieving realistic results with the corresponding instrument.

"Marcel Barsotti's EW6 is a wonderful collection of ethnic vocals and instruments. It is as inspirational as it is impressive in its scope and user friendly design."

"With Marcel Barsotti’s EW6 I was immediately inspired. As my hands touched the keyboard, ideas flourished and music flew from my fingertips.
Beautifully sampled and incredibly deep. Exploring the collection is like a crash course in Ethno Musicology."

"Just a note to let you know Ive been using Ethno World 5 quite a lot recently and find it just amazing, be it the licks or the playable instruments.
My whole new set “Prince of India” uses instruments from EW-5. That library is just an endless source of inspiration! Thanks a lot for this work!"
Bruno Cariou