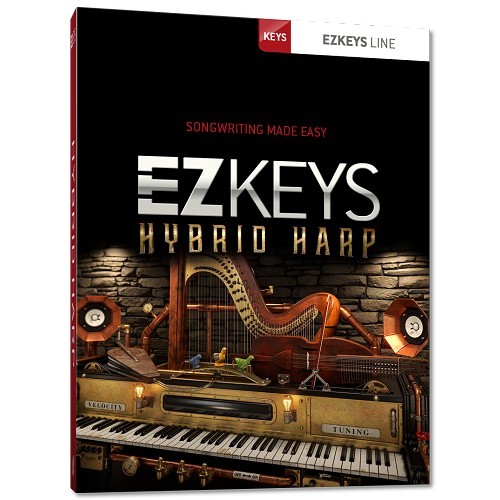 Even though the laws of thermodynamics long ago ruled out the possibility of a perpetual motion machine, EZkeys Hybrid Harp comes very close. The laws of physics may still apply, but fact remains that this peculiar ‘machine’ has an inherent mojo that seems to make sure you’re never short of ideas. It literally runs and feeds off of you and your own imagination.

EZkeys Hybrid Harp presents five individual instruments, all layered, textured and saturated in various capacities to form unique and never-before-heard hybrids of sounds. The undisputed star of the group is an iconic Style 23 harp. In addition to this, a traditional Swedish nyckelharpa (or “keyed fiddle”), two harmoniums, a bowed glockenspiel and a set of ocarinas were sampled. Combined, this seemingly odd group of instruments – that in logical terms have no earthly business sharing the same sonic space – culminate in what must be described as a vastly puzzling audio universe of plucking, percussive, soaring, airy, beautiful and ever-so-slightly dissonant sounds.

Welcome to one of the most multifaceted EZkeys titles yet – one that will trigger parts of your creative mind you didn’t know existed. These are sounds ideal for anything you can imagine. Literally.

If you have registered at least one EZkeys Instrument already, you are eligible for the reduced "EZkeys Sound Expansion" to get the Hybrid Harp and save big!