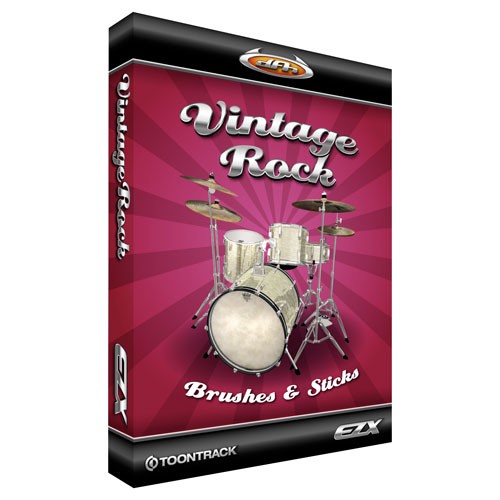 (8)
€ 69,-
$ 65.69
£ 61.72
hear
Update Required To play the media you will need to either update your browser to a recent version or update your Flash plugin.
Related products
More Info
Reviews
Ratings
Requirements

The Ludwig Drum Company had little idea what was about to hit them in the months following February 9th 1964, The Beatles debut U.S. Television appearance on The Ed Sullivan Show. The band were a sensation and almost overnight everyone wanted to own a set of Ludwig drums just like Ringo´s. In fact, Ludwig were still struggling to keep up with demand when along came another drumming icon John Bonham. As well as his use of the Supraphonic snare drum, Bonham popularised larger sizes, including the 24" bass drum similar to the one sampled for the Vintage Brushes and Sticks EZX. This 60´s era Ludwig set belongs to 2khz Studio owner Nick Yeatman and we were very happy he lent it to us so we could capture that phat and funky Ludwig sound.
The Ludwig Keystone Kit was played by Chris Whitten and mixed by producer Peter Henderson and Mattias Eklund from Toontrack Music. To it we´ve added the classic Ludwig Black Beauty and Slingerland Radio King snares and a number of cool complimentary cymbals. The Vintage Rock - Brushes and Sticks EZX is topped up with customized midi played by top notch drummer Morgan Ågren (Frank Zappa).