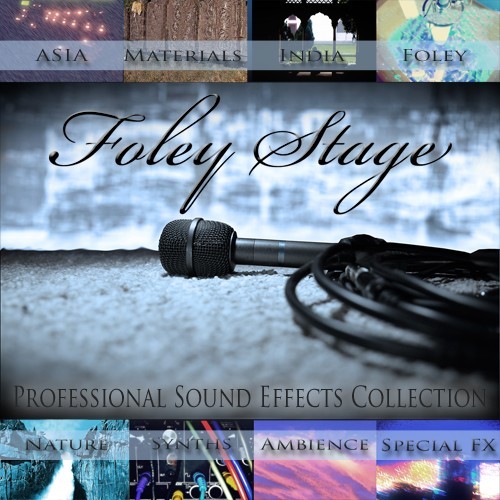 € 895,-
$ 895.00
hear
Update Required To play the media you will need to either update your browser to a recent version or update your Flash plugin.
Related products
More Info
Requirements

Foley Stage is the first Sound Library to be recorded on the Asian continent. Ambience recordings from Asian cities and villages, Ambiences from real life situations, Asian ceremonies, weapon- und battle sounds, firework sounds, electronic sounds from synthesizers, sci-fi and monster sounds and the absolutely essential and globally usable basics from a sound archive. With its 5.000 files, 40.000 different takes and a total of 129 GB sample material, Foley Stage not only gives you everything you need for your game-, film- or documentary production but also offers an extensive journey through the acoustic world of Asia.

All Foley Stage files contain metadata for a perfect integration into Soundminer!

The boxed version includes a USB drive for Mac & PC

Typical, diverse ambiences from different cities and villages in China. They are well recorded and treated for movie issues. Due to their length and variation, these sounds make great loops as with games.

Fireworks and fire crackers, both single sounds and ambiences. This kind of sound only happens in China - and nobody recorded it before! The sound of the most important festivals for Chinese people, that can be used for cannon fire and super clean battlefield action as well.

The first professional SFX library of its kind - real Chinese Kung Fu action with hard impacts. All in multiple types and takes. Both real action and foley sounds. Our attempt to create real Kung Fu sounds, that both Western and Eastern people will find authentic.

Cold weapons from Chinese history: Sword, spear, fingers, and fists were recorded and processed to forge authentic Asian sounds, even for western film productions. Merge these sounds with the synthesizer pack to create magical Kung Fu sounds for movies and games.

This pack was specifically designed for games like MMORPG, RTS or FPS. Aside from typical step sounds, there are some highly unique ones, too. At „footsteps“, for example, you will find countless step- and movement-sounds in full armour.

Small materials of everyday life, recorded with an exceptional microphone technology. These are the sources of making Sci-fi, CG FX or musical FX. All multiple types and takes. These materials are often used for games and movies. Typical video game demands were considerred in the post-production.

Sounds of several tools and utilities of the common life. Instead of always including the room sound, like most libraries do, does our library offer both the dry and the ambience sound. A very useful library for sound designers, no matter if it is for a game or film-project.

This library contains more than 20 kinds of battery-driven toys, as well as Chinese toys like bamboo-snakes. Brilliant sounds for Sci-Fi, Creature-Design or CG FX!

All sounds were recorded in India, carefully edited and well balanced - very useful for feature films, games or documentries. Sounds like the clean rattle of old trains or religious festivals. All recorded in long takes, using close-mic techniques.

In all the existing libraries, water sounds too physical and without any emotional or colorful taste. It is just the sound of water. But water is flowing and moving. There should be some space for imagination and feeling. This concept of recording and editing water sounds can be very handy for documentries, movies or games.

Producer´s notes for the audio demos