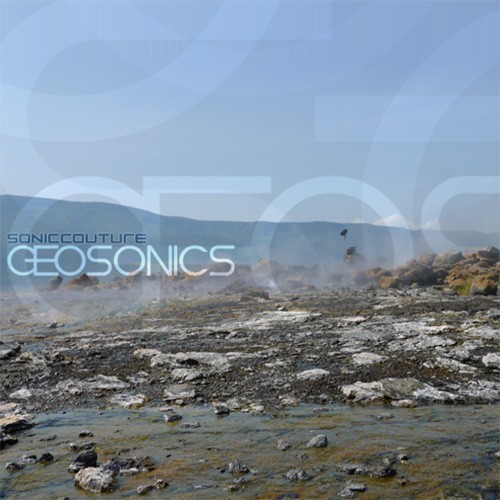 Geosonics is a collaboration between legendary field recordist Chris Watson and Soniccouture. Hundreds of hours of recording time, in some of the worlds most extreme and inhospitable environments, combine to form a library of rare sonic artefacts that cannot be found anywhere else. Using this unique collection as a starting point, Soniccouture created a wealth of sound design material ; waves and sampled textures which, when layered and combined with Watson's recordings create the most fluid, organic soundscapes ever.

Recorded during various trips to the North Pole, Iceland and other Arctic regions, this category features incredible recording feats such as hydrophone recordings from the inside of glaciers, micro-recordings of deep water shrimp fighting, and the calming blips of water freezing in realtime.

Wind - silent in itself, it only reveals itself sonically once it hits something. Rushing in from the sea towards the Kalahari, it tears across the sand dunes and rips through desolate river beds. Watson buried hydrophones deep in sand dunes, repurposing the under-water recording devices to function in deep desert depths.

A hollowed out Acacia tree was fitted with minuature and contact mics in the 40 degree heat, and the musical moaning sounds of the wind in its trunk were captured. Melted holes in polar ice create feedback whines, and the railings on an abandoned air-base form the basis of a sinister sound-scape.

The recordings that inspired to first approach Chris Watson, and ultimately led to Geosonics ; the incredible drone-scapes created by vast runs of wire in natural enviroments - 'Like giant guitar strings in the landscape', to paraphrase Chris. Contact mics attached to wire fences, sculptural installations or even power lines record changes in weather and temperature as stunning soundscapes. Chris Watson made many of these recordings during his residency at the Wired Lab in NSW, Australia, an artist-led organisation founded by Sarah Last. Inspired by the technique further recordings were made on overhead railway cables and simple farm fences in Cumbria, UK.

Wire recordings make fantastic material for sound design work - many of the pitched sample sets in Geosonics were made by processing the wire recordings to extract pitched sounds. Their high harmonic and noise content means that they sound great when filtered or shaped into percussion, too.

Recordings made in the swamps of Venuezela and Madagascar. Some of the most inhospitable recording environments of all due to the proliferation of tiny biting things. Chris used huge 100 metre runs of microphone cable to allow him to situate himself well away from the swamp life during recording. 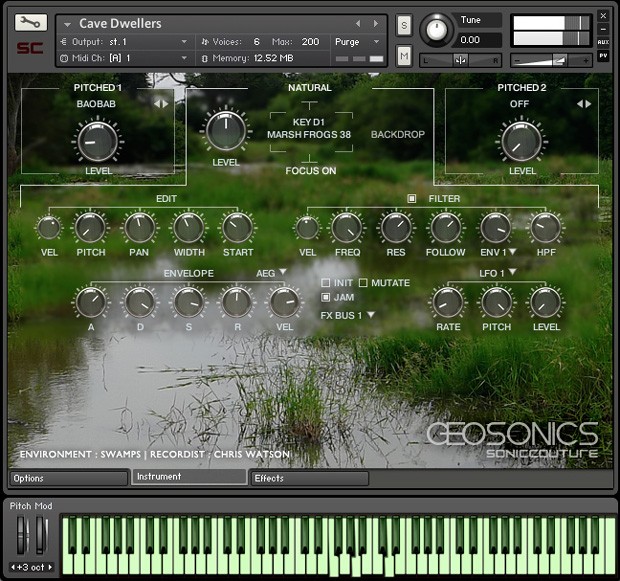 In addition to the 65 original Chris Watson field recordings (4.7GB), Geosonics contains 140 tuned samplesets, for layering and sound design. This additional sample material is a combination of useful 'building blocks' such as sine waves, sawtooths and strings; as well as processed versions of the Watson recordings. These sample sets are essentially tuned versions of the original recordings - Soniccouture used various DSP processes (spectral morphing, convolution, granulation) to 'forcibly extract' pitched, harmonic material that could be played chromatically on a keyboard.

To create a large preset library (400 presets) with real creative depth, Soniccouture decided to colloborate with some of our favourite sound designers. With such unique material to work with, they were curious to see what an 'All-Star' sound design team could do with it. The result does not disappoint, with many different takes on building atmospheric yet musical patches.