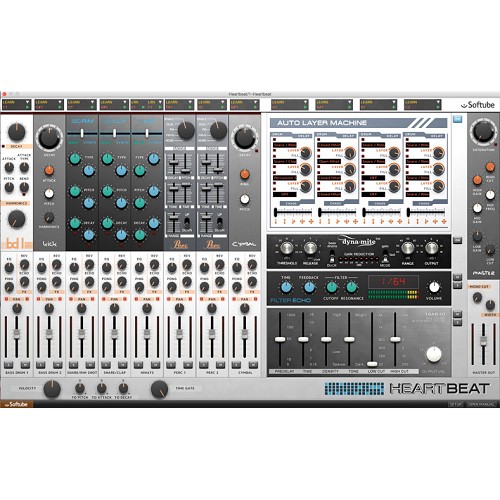 (3)
€ 109,-
$ 102.00
£ 98.20
hear
see
Update Required To play the media you will need to either update your browser to a recent version or update your Flash plugin.
Reviews
Ratings
Requirements 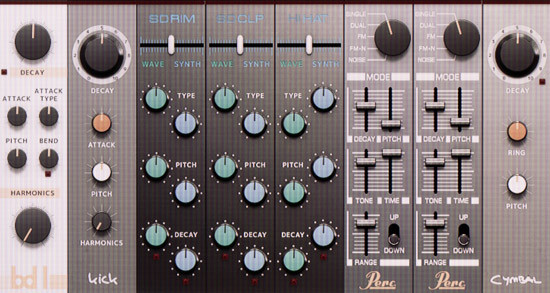 Heartbeat is likely to cause severe palpitations. It is the drum synth of your dreams, combining modeled analog synthesis of yesteryear with forward-thinking features and flexibility. The modeled analog sound engine, the Auto Layer Machine and the included top-of-the-line effects turns Heartbeat into a killer package for your beats.

The synthesis engine
While Heartbeat draws inspiration from the best analog drum synths from the 1980s, it does not emulate any existing drum machine. The sound mostly originates from Softube's own modeled analog synthesis, which has been augmented with carefully selected waveforms.

The core of Heartbeat consists of the eight instrument channels. You will find two different bass drum channels, which can be as punchy and deep as you want them, but are also perfectly capable of producing snappy and hard hitting woody textures. The two dedicated snare drum channels have six parameters each which allows you to achieve anything from edgy rimshots, soft and whispery snare rolls to machine-like claps.

The percussion channels are identical and can be used to model anything from 80s style synthetic toms to cowbells and noise drops. And just like the other channels, the hihat and cymbal channels offer flexible synthesis engines—tweak to your heart's desire!

The effects
In order to make Heartbeat your one stop shop for beat programming, we added a fully featured effects section. It includes slightly adapted versions of our beloved model of Valley People Dyna-mite and one of our top sellers of all time, the TSAR-1 Reverb. The Dyna-mite is a dynamic shaping Swiss army knife with a serious attitude. Limiting, compression, gating, sidechained ducking—Dyna-mite handles it all. And TSAR-1 is simply the most gorgeous plug-in reverb ever created.

The all new Filter Echo is a filtered delay effect with adjustable Cut Off and Resonance parameters. And finally, the output saturation can go from juicy to gritty and is not taken from any existing Softube product.

Each of the eight channels has a dedicated mixer channel with controls for volume, pan, ping-pong (auto panning), EQ (adapted specifically for each instrument) and send levels to the reverb and delay effects.

A mind of its own
Heartbeat is not only about sound, it's also about inspiration and interaction. This is where the innovative Auto Layer Machine comes in. The Auto Layer Machine has four channels that can each be used to layer sounds or trigger a chain of events. This can be used to create new sound textures or create automatic fill patterns in up to four steps.

If things still get too predictable, move the Chaos sliders to the right—these add an element of randomness, ranging from subtle variations to massive trigger-riot mayhem!

Heartbeat supports Native Instrument's Native Kontrol Standard. This means you can use it with Komplete Kontrol keyboards and Maschine units and get the same intuitive hands-on control of Heartbeat's functions as with any of Native Instruments' own products—all automatically laid out on the hardware's knobs, buttons and keys, and with no additional setting up needed.