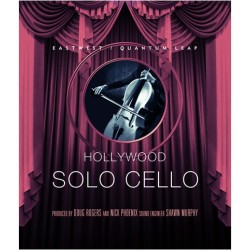 The EastWest/Quantum Leap Hollywood Solo Cello virtual instrument is a library designed to work together seamlessly with the Hollywood Orchestra series. While it includes the same number of microphone positions, and many of the same features, there are a few key differences that are outlined below.

The microphone configuration is designed for solo instruments, as opposed to a full orchestra. Instead of the surround and vintage surround microphone positions used in the Hollywood Orchestra series, the Hollywood Solo Cello supplements the close and mid microphone positions with vintage alternatives.
In the Hollywood Solo Cello, dynamics and vibrato depth are linked together on the Mod Wheel (CC1), whereas the Hollywood Orchestra series offers independent control of dynamics and vibrato depth.
A new type of Legato instrument is available (Legato Sustain) that combines the legato and sustain articulations into one sample layer, allowing for more continuity over the duration of a note.