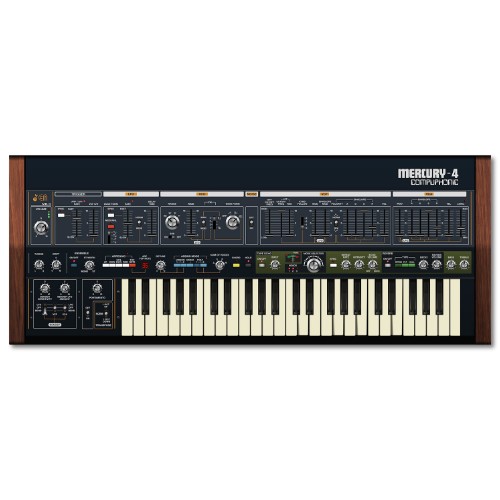 Mercury-4 is a detailed emulation of one of the best-sounding and quirkiest polyphonic synthesizers of the late 1970's, the Roland Jupiter-4. It’s the rarest and most sonically unique of the fabled Jupiter series, and Cherry Audio have gone to great lengths to recreate the subtle (and not-so-subtle) nuances and character of this beloved classic. Every aspect of Mercury-4 has been expertly modeled upon a vintage Jupiter-4 originally owned by Greg Hawkes of the legendary 80’s new wave band The Cars, and played on their double-platinum 1981 album Shake It Up. In Greg’s words, Mercury-4 “sounds just like my old Jupiter! It’s nice to have it back.”

The Jupiter-4 had its share of disadvantages, including limited patch storage, just four voices of polyphony, and boat-anchor weight. Cherry Audio’s Mercury-4 improves upon the original’s design by offering 16-voice polyphony, infinite patch storage, velocity sensitivity, MPE support, and much more. Cherry Audio have even paired it with a fantastic model of the classic Roland Space Echo tape delay.