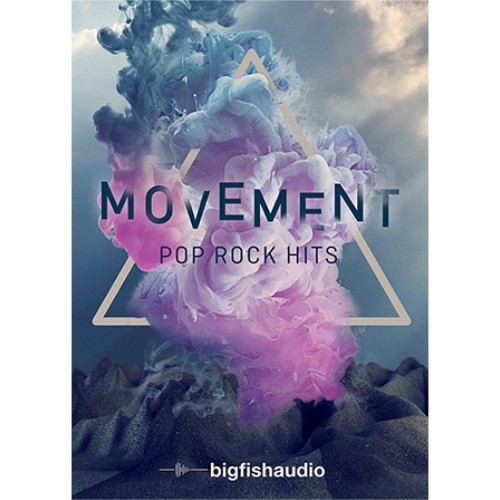 € 129,-
$ 129.00
£ 117.81
hear
Update Required To play the media you will need to either update your browser to a recent version or update your Flash plugin.
Related products
Requirements

The duo Jeff Carruthers and Michael Carey and Big Fish Audio present Movement: Pop-Rock-Hits, a Pop-Rock library packed with radio-ready tracks and chart topping hits. Movement is based on the sounds of both current radio hits and styles that are on the rise. Movement is ahead of its time and provides all the elements necessary to create solid and modern pop-rock tracks. Only the best production methods and equipment have been used for the 3.5 GB of original content. Each of the 10 Construction Kits contains complete sections to create entire rock tracks, as well as a folder of multi-drum items, giving you complete control over your drum track.

Michael Carey, an established and highly sought after LA guitarist, producer and programmer, takes care of the stringed instruments here with the vibe and precision that comes only with a lifetime of recording and performing at the highest level. Michael also co-produced this library, and his unique sound gives Movement something truly special. All Drums and Percussion are straight from the legendary M.B. Gordy, and sound every bit as amazing as you would expect from the man who's reputation is only topped by hearing the man himself. In Movement: Pop Rock Hits, we give you access to 10 full drum sessions with multi stems and stereo mixes from M.B. Gordy himself. All vocals were performed by Julia Feldman, and drip with character, and true emotion that you won't find anywhere else. The entire project was co-produced and overseen by the amazing Jeff Carruthers, who is hands-down, the very best in the business. The name Jeff Carruthers is synonymous with “Quality” and everything this amazing musician and producer touches is pure gold. Not only did Jeff produce, he also recorded some instruments for the library and the result is simply stunning. Movement: Pop Rock Hits is a library that was exciting to put together, and we know it will be exciting to use, take a listen to the demos and see for yourself!