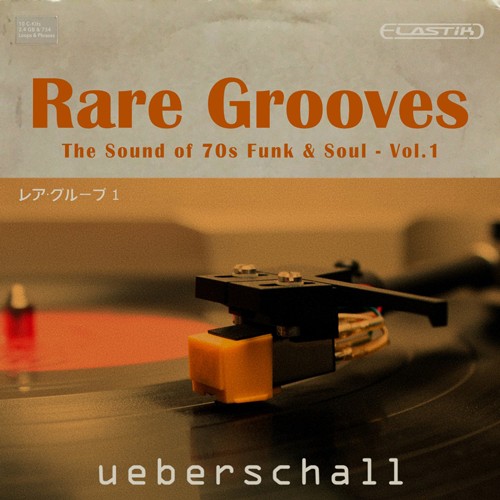 (1)
€ 99,-
$ 99.00
hear
Update Required To play the media you will need to either update your browser to a recent version or update your Flash plugin.
Related products
Ratings
Requirements

The wild, wild seventies - experiments in all areas and of course in music! This decade has stretched the borders of technology and expanded the sounds and styles in a wide range. It is not without a cause, this decade has been sampled most by producers and DJs. Rare Grooves exactly offers this feeling but on a legal base.

Rare Grooves brings the time and the feel of magnetic tape recordings into your DAW. Due to financial and technical limits of smaller studios of that era, sound experiments were a crucial part when finding one‘s personal sound. Among the favored stylistic devices were tape saturation up to the VU-meter‘s limits, lurching tape-delays, unusual reverbs, amplifier feedback an of course a good portion of overdrive - real garage sound.
Rare Grooves focuses on the early era of Funk where groovy soul-beats and energy-charged rock-elements still had an impact on this genre. This makes this library the perfect choice for hip-hop, breakbeat, crossover- and dance-tracks; be it for music production, mix tapes, soundtracks or advertisements.

Rare Grooves consists of 10 construction kits with a total of 734 loops. The kits cover a tempo range from 78 to 122 BPM. Kits 1 to 9 include intro, parts A and B, break and outro. Construction kit 10 contains 9 tracks of different classic breaks designed to be used in all other kits.
All instruments are available on single tracks with that appropriate raw sound, allowing you to use grooves as a whole or integrate single instruments into your own tracks.
The drum sets are categorized into bass drum, snare drum top, snare drum bottom, hihat, ride, crash, toms, tambourine and overheads. We also added complete mixdowns of the beats which are useful for fast work as well as for perfect reproduction of that seventies sound - just like getting a vinyl-sample.
For the real groove, this library only uses typical funk-instruments, being recorded with the matching vintage-effect processors: Rhodes electric piano, electric bass and guitars, strings, brass and synthesizers.

Rare Grooves is a library of character, equally suited for music production, film- and television dubbing and games. In short: whenever you need the unique black-music-sound of the early seventies, Rare Grooves is your choice.

Elastik-Features
Ueberschall‘s Elastik player is the ideal tool for DJ-based production in your DAW environment. Integrate full grooves or single loops into your own tracks. At the same time, you can modify any loop using effects such as filtering, format tools, reverse playback or resampling. Also, immediate time-stretching is possible, using zplanes advanced élastique pro algorithm.
All Elastik libraries use a clearly arranged browser using attributes for fast searching of loops and instruments across all installed construction kits and libraries. The best premise for crossover-productions.