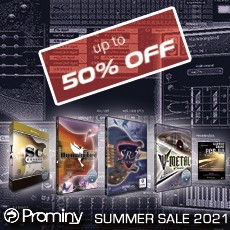 Prominy - Summer Sale: Up to 50% Off Single Libraries & Bundles! 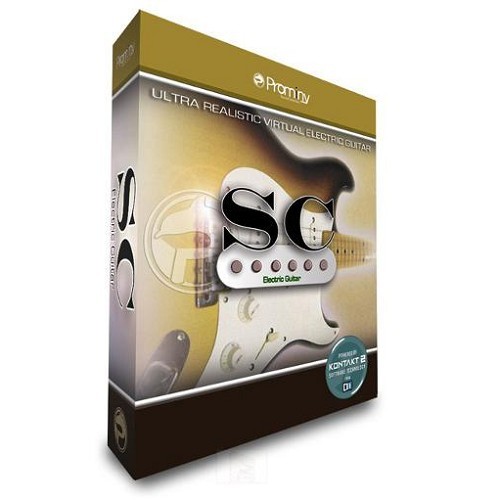 You can also change the mix balance of each pick-up microphone.

SC Electric Guitar reproduces even the switching noise of the pickup selector!

Guitar chord sound which is emulated using single note samples does not sound real. SC Electric Guitar includes the huge number of ´real´ recorded (in other words, ´pre-recorded´ or ´pre-played´) chord samples. Each chord instrument can be used as a SPM instrument and you can instantly access the various types of guitar chords.

Prominy´s guitar libraries are the only ones which inlude such a huge number of the ´real´ chord samples.

Feedback
In actual guitar performance, you get feedback sound when a heavily distorted tone is played in front of (or a certain position from) the amplifier. SC Electric Guitar reproduces the feedback sound. The pitch and fade time of feedback can be changed.

SC Electric Guitar includes a huge number of the guitar playing techniques, and most of them are available as SPM instruments.

Double-Tracking
This is a technique which is frequently used in recording guitar tracks. It gives the guitar track a nice, wide-spread stereo images and thickness. With SC Electric Guitar, you can reproduce it very easily just by loading ´SPM double-tracking instruments´. No identical samples are played simultaneously in both channels. You don´t need a stereo delay or tweaking your midi data to emulate the double-tracking.

Direct signals from the guitar
You can make your own guitar sound so it suits the music genre you´re working with by adding your favorite amplifier simulator.

Picking noises are recorded in multiple forms on all frets and strings
Picking noises made while playing a guitar is one of the most important characteristics that identify a live guitar recording. That is why we took great care in capturing many variations of picking noises. Adding these noises, with consideration to timing and picking style, will make your guitar tracks sound natural. When you use picking noise sampled from a different position of the fret board than the one you´re applying it to, the result is an unnatural sound because the noise will not harmonize with the original note´s sustain sound.

Other features
- Expansive number of playing techniques, extreme power of expression that no other guitar library has captured before