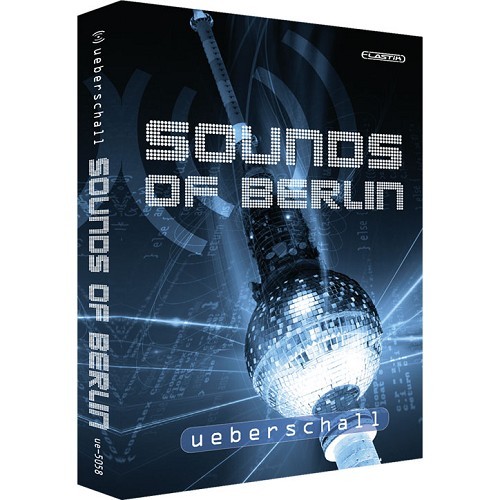 € 99,-
$ 109.00
hear
Update Required To play the media you will need to either update your browser to a recent version or update your Flash plugin.
More Info
Reviews
Requirements

from the city that shaped electronic music

Background
The musical-metropolis Berlin influenced the Electro and Minimal Scene like no other city in the world. Ueberschall is capturing this exact spirit with its release „Sounds of Berlin“. Providing a localized source of inspiration and a professional, standout production device for sound masters worldwide. The first part of this series features the two top artists Ruede Hagelstein and Asem Shama. Both DJs are well known for their releases on labels such as „Upon You“, „Lebensfreude“ and „Sportclub“ and delivered their unique spirit to clubs and festivals like Watergate (Ger), Womb (JP), Fabric (UK), Berghain (Ger), Cocoon (Ger) and Sonar (Esp).

With the release „Sounds of Berlin“ Ueberschall covers the different subgenres of minimal sound — from 120 BPM Afterhour-House to 130 BPM Dancefloor-Techno — and is oriented around labels and themes such as „Kompakt“, „Mobilee“, „Vakant“, „Boxer“ and „Cocoon“. The 1 GB content is built for professional club sound needs. 1258 Loops & Samples provide enough material to be invited to countless sessions and hours of inspiration and creativity.

Forward Features
Each of the 75 construction kits is broken down into its single lines, each kit offers bassloops, synthloops and drum and percussion loops which can be integrated easily into every liveset, thanks to Elastik. For your own groove creation you can use the single drumsounds which provide the low-end treatment and high frequency sizzle for the right punch in every club. All material is preprogrammed and ready to roll out thanks to the bundled Elastik interface. Elastik has many features which compliment the electro genre nicely: filters per note, hi quality transposition, granulation effects, volume settings per note and easy mixing with additional Elastik libraries.

Credits
Asem Shama
There are just a few electronic artists that started 15 years ago and do still create new trends. Asem Shama is one of them. Since the early 90s he is one of the pioneers of Germany‘s electronic music scene. Since his beginning the Berlin-based DJ released over 80 tracks on different labels and played in clubs from Brazil to Japan. Today he is producing artists such as Monika Kruse and Marc Miroir.
http://www.myspace.com/asemshama

Ruede Hagelstein
The DJ and producer Ruede Hagelstein is resident-DJ of the Berlin „Watergate“ club since 2006. He became a member of „Upon You“ records with his first EP „Ghostdriver“ in 2007. Since then his tunes are played by DJs such as Sven Väth or Michael Meyer and appeared on different compilations by „Cocoon“ and other labels.
http://www.myspace.com/ruedehagelstein