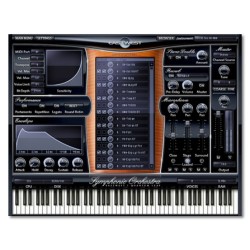 (7)
€ 319,60
$ 399.50
£ 284.71
hear
Update Required To play the media you will need to either update your browser to a recent version or update your Flash plugin.
Related products
More Info
Ratings
Requirements

Symphonic Orchestra PLAY Edition
A lot of time and effort went into creating these 64-bit (with 32-bit compatibility) versions. There is no other orchestral product on the market that offers such upward compatibility for beginners to professional composers, and it is the most awarded orchestral collection.

The boxed/shipping version will be delivered on an external USB 3.0 hard drive for fast and easy installation!

The following versions are available:

EW-177 EWQLSO PLATINUM PLUS COMPLETE
contains 16-bit and 24-bit samples so users can compose 16-bit (for 50% more efficiency) and render 24-bit (for the best quality) with a switch on the interface, each with three mic positions and full articulations (194GB)

Load MORE thanks to 64-bit support
**64-bit support** allows you to load many more instruments and voices, limited only by your system RAM (32-bit support is included also).

Networking Support*
If you still need more power, our NETWORK CONTROL* allows you to load instruments on other machines controlled from your host computer. No more trips back and forth between computers, no more KVM switching when loading projects. No need to buy additional software.