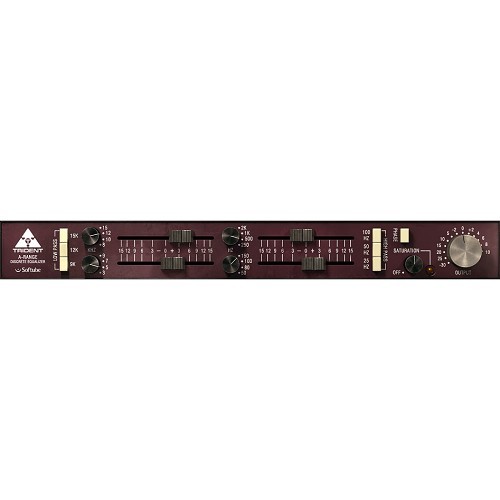 The Trident A-Range is a legendary piece of equipment. As only thirteen A-Range consoles were ever made, it remains a holy grail for sound engineers and producers around the world that hope to create works of art equal to those that were originally recorded on the A-Range — David Bowie´s Ziggy Stardust, Queen, Elton John, the list goes on...

The A-Range plug-in from Softube is the first and only native and TDM plug-in that has been fully endorsed by original designer Malcolm Toft and Trident Audio.

The plug-in is a model of a channel on one of the original 13 Trident A-Range consoles. We chose to model channel 15 from the console at Sweet Silence Studio ´B´ in Denmark, producer Flemming Rasmussen´s favorite channel for recording lead vocals. Flemming also used it for the solo and rhythm guitars on Metallica´s "Ride The Lightning" and "Master of Puppets", and Ritchie Blackmore´s guitar on the Rainbow albums "Difficult to Cure" and "Bent out of Shape".

The A-Range channel features four bands of equalization and high and low pass filters. The sound of the bands is often referred to as "colorful" and "musical". When running a hot enough signal through the original unit and boosting the bands, it is possible to get it to distort, the result is a hairy and effective saturation that is just right in some situations, and just wrong in others!

"When I tried the Softube Trident A-Range equaliser plug-in for the first time, a big smile came upon my face. It was just like getting my desk back again. It sounds exactly as I´m used to hearing the eq."
Flemming Rasmussen
Producer, Mixer, Engineer (Metallica, Morbid Angel, Blind Guardian etc.)

"I am pleased to say that this is an incredibly accurate software recreation of my original A-Range design."
Professor Malcolm Toft
Original designer of the A-Range console at Trident Audio Developments