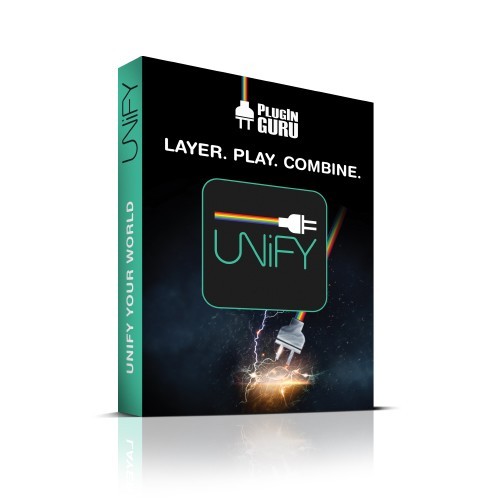 (1)
€ 79,-
$ 79.00
hear
see
Update Required To play the media you will need to either update your browser to a recent version or update your Flash plugin.
Ratings
Requirements

Unify is a revolutionary new type of instrument that lets you layer, play, and combine AU, VST, or VST3 plug-ins to create new, inspiring, and outrageously creative sounds. Not only can you load your own plug-ins, but Unify also ships with its own built-in library of virtual instruments and audio effects, making it immediately ready to use right "out of the box". Including 400+ stock patches crafted by renowned sound designer John "Skippy" Lehmkuhl, Unify's core library is already extremely versatile. However, when blending Unify's core library with your favorite plug-ins, the creative possibilities are truly endless.

Unify ships with its own "Guru Sampler", six synths (including well-known open source virtual instrument Dexed from Digital Suburban and OB-Xd from discoDSP), plus 40+ different audio effects. Additionally, eight macro controls on Unify's interface allow you to control any plug-in's parameter in realtime.

While Unify is a self contained instrument (shipping with its own built-in library of virtual instruments and audio effects and 400+ stock patches), you can also access all of your already owned plug-ins inside of Unify. This is where the magic happens! Instead of multiple tracks and complicated routings, everything is done in one unified interface with the ability to recall patches.

A few key features of Unify include:

Unify merges the unique characteristics of its own built-in library with the user's library of virtual instruments and audio effects in one easy-to-use, intuitive, and flexible interface.