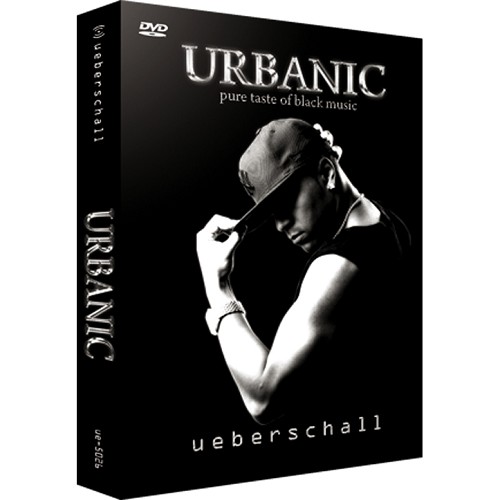 € 99,-
$ 97.68
£ 90.01
hear
Update Required To play the media you will need to either update your browser to a recent version or update your Flash plugin.
Related products
More Info
Reviews
Requirements

RnB´s up-to-speed, most resilient jams are now available in Urbanic. These crazed Hip Hop eruptions will keep you ahead of the game with nothing less than feverish perfectionism at your disposal. Make your moves with 34 glistening RnB, Soul, Club, Construction Kit grooves ready to get things blazing. Featuring next generation c-kits with intro+outro tracks for an extended variety of creative impulses. All sounds have been seduced by Elastik Audio format and are ready to drop.
Take whatz yours.

Urbanic is a unique, quality sample production boasting a massive library, including 34 construction kits which contain over 2.8 GB of cutting-edge Hip Hop and R&B sounds.
This Library is jam packed with extraordinary samples, basslines, leads, pads, fx sounds and a whole bunch of Drumsounds in 34 powerful Construction Kits. The variety of sequences gives you a powerful tool to create successful tracks. The content is geared toward Black Music producers looking for authentic club sounds. Everything is programmed to conform to the musical genre.

The construction kits on Urbanic are divided up into specific folders - one containing the main kit, a variation kit with alternative sequences and phrases, as well as a kit with separate intro and an outro. On top of that you get a folder containing all the individual drum sounds which makes it much more flexible to use and provides a very easy way of arranging a whole song including all the variations you need to make the perfect club track.

Responsible for the production of Ueberschall Urbanic are Michael Jackson, Dj Drastic and Marc Steinmeier—three highly respected Black Music producers in the industry. This team has produced and remixed for well known artists such as NAS, Justin Timberlake, Christina Aguilera, Willie Joe and Eminem to name but a few.
These samples comprise a state of the art Library of Hip Hop and R&B sounds to achieve an authentic, actual club sound.

Urbanic
there’s enough here to make it worth checking out if you’ve already got the basics covered elsewhere in your sample vault, but are on the lookout for some creative instrumental hooks to freshen things up.

(...)
The instrumental riffs and synth parts, on the other hand, include a lot of really good imaginative stuff, nailing ‘cheesy-but-cool’, without wallowing complacently in tired GM Soundfront clichés. There’s a large helping of those fizzy polysynth pads that are springing up all over the charts like a rash at the moment (think Rihanna’s ‘Umbrella’, for example), as well as some nice crusty effects and judicious vinyl patina. Basses are often enormous and packed with character — a highlight of the library for me – and there are also some lovely wordless sampled vocal phrases, obviously digitally manipulated but with a deft musicality that really works.
(...)
Fortunately, a lot of these criticisms are mitigated by the construction-kit format, allowing you to underpin Urbanic’s bass and instrumental riffs with other drum parts that really put the boot in. Also in the library’s favour is the way its respectable 2.8GB bulk has been organised within Ueberschall’s bespoke Elastik Player (for more information on this, check out my review of Groove Shadow Elastik back in SOS February 2008). There are 34 themed sets of construction kits, each set containing main, intro and outro kits, as well as another variation kit in some cases, and each set of kits also includes an additional Elastik Player preset containing single-hit drum samples taken from the main drum loop. Each set’s original key and tempo is displayed, but the Elastik Player technology provides a lot of flexibility for bending samples outside these to fit pre-existing tracks.

So although Urbanic might not exactly supply all your hip-hop and R&B needs, there’s enough here to make it worth checking out if you’ve already got the basics covered elsewhere in your sample vault, but are on the lookout for some creative instrumental hooks to freshen things up.

Urbanic
If you are using Construction Kits than take Ueberschall - they always sound official!

A constant stream of DVDs leaves Ueberschall and supplies the user of the Elastik-Player with new material. This library takes care of Black Music in it‘s most urban way a.k.a. R&B and Hip-Hop
(...)
The library is filled with 33 Construction-Kits that are separated into Intro, Outro, Main, Single Samples and Variation.
(...)
The Kits do have a phat arrangment. The grooves have punch ad infinitum, the melodical parts are not too pushy so there is enough space for a new melody.
If you are using Construction Kits than take Ueberschall - they always sound official!

Urbanic
A big advantage for the creative process in comparisson to other Sampling-CDs. At last Urbanic doesn‘t cost more as any other library while the competitors don‘t offer a sample player.

Basics:
Behind Urbanic, the „Pure Taste Of Black Music“, are producers that worked together with Justin Timberlake, Christina Aguilera or Eminem. Stylistically seen this production aims at RnB and Hip Hop
(...)

Sounds:
The library comes with two files split into 34 Construction Kits all around Hip-Hop and RnB. Each kit has an intro-, main-, outro- and sometimes a variation-part. With a complete mix and single lines each. They also include the single drum shots. All in all we have 1.280 loops and samples within 2.8 GB. Musical the kits are very well produced with a huge creativ input, this is truly the experience of the producers.
(...)

Conclusion:
The very flexible Elastik-Engine is just as made for the work with Hip-Hop Construction Kits. Fast workflow, clear structure and a very easy way to change tempo and pitch of each kit to suit them to each other or any other project. A big advantage for the creative process in comparisson to other Sampling-CDs. At last Urbanic doesn‘t cost more as any other library while the competitors don‘t offer a sample player.

Free ELASTIK 3.5 Player is included in this product.