The AS Piano Collection is a bundle of 5 of Acoustic Sample's Pianos. You save around 40% when buying this bundle.

This bundle gives you all of the piano sounds that you might need, from the big powerful concert grand, to the old jazz sound and the nice training piano that you might have at home. 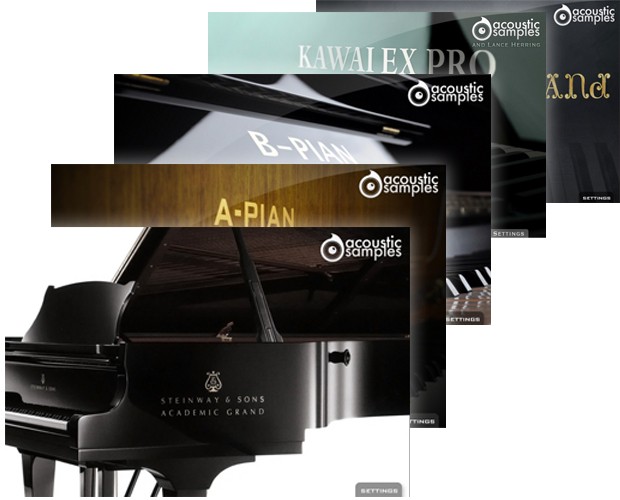 The Kawai-EX Pro sample Library is a fabulous, powerfull and bright 9-foot (276cm) KAWAI EX concert grand piano that used to be in the Kennedy center in Washington DC. We worked closely with Lance Herring on this library (this is our second attempt after the AcademicGrand) and decided to give our project a new dimension, we carefully recorded this extraordinary instrument with 3 microphone pairs and state of the art Gear to try and recreate how powerfull and precise this instrument can be. 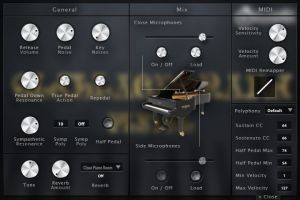 Everybody keeps on sampling the best and cleanest piano ever! here is a completely different approach. We sampled an old Pleyel Grand Piano (F-71240 model from 1928) with vintage gear like a studer console and tube microphones, it has the rich and warm sound of the old jazz/blues or even classical music recordings.

The AcademicGrand is a 1963 Steinway D concert grand which has seen countless recitals and concerts over the years where it served as the University of Arkansas´ primary concert instrument. The piano has been an inspiration to hundreds of students and visitors, and with being well-maintained and cared for, it´s a wonderful instrument with a unique history and classic American Steinway sound.

The A-Pian Grand piano is and old french Gaveau piano. Gaveau was a French piano manufacturer. The company was established in 1847 in Paris and used to be one of the three largest piano makers in France (after Érard and Pleyel). This particular piano was build in 1960 and is reffered to as a "crapaud" ("Petite Grand" in english), which means that it´s a little smaller than a "quart de queue" (baby grand). It has a very particular sound, very bright and full of inharmonicity in the bass due to the short lenght of the strings.

The B-Pian Upright is a bad, old, out of tune, mecanically unperfect but still usable upright piano. After watching a movie (we won´t say which one) scene with a guy playing on an old upright and hearing what clearly was a 9 foot grand, we decided that it was time to produce that sound everybody knows, the sound of the piano you played on when you started learning the piano, the one that you were at your friends place and is taking dust and that goes out of tune in two weeks.