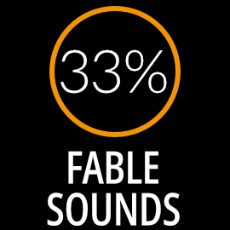 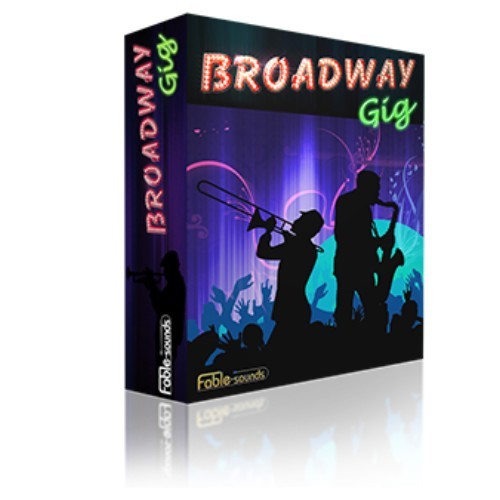 Broadway Gig™ is redefining what a keyboardist can do on the stage, and on a budget. With 8.6 GB of audio content and 12,952 unique samples, Broadway Gig includes the segments which are most useful for playing live shows, taken straight out of Fable Sounds’ critically acclaimed flagship product – Broadway Big Band™.

4 wind instruments: Trumpet, Trombone, Tenor Saxophone and Baritone Saxophone, all with the microphone setups most optimized for fitting perfectly in the PA mix, creating the sonic illusion that there is a live horn section on stage. Thanks to the Unison Section feature, multiple instances of the instruments can be stacked to create a larger sounding section. Also, the revolutionary Real-Rime Orchestrator feature is included, enabling a fully orchestrated sounding mixed section, when playing on a single keyboard in a live show. This means polyphonic-polyrhythmic legato, distributed to the instruments the way you want them to.

Whether you play Funk, Rock, Pop, Blues, R&B, Latin, Hip-Hop, Jazz or Reggae, this virtual instrument is perfect for keyboardists playing live shows of any scale. 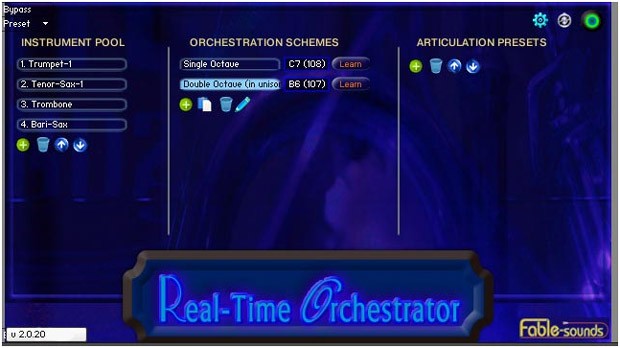 A groundbreaking feature enabling polyphonic, poly-rhythmic legato across a mixed section of instruments. Using RTO you can play an entire section on the keyboard, and the notes you play are orchestrated in real time and distributed to the various instruments in the RTO multi, based on orchestration schemes that you can create yourself. This is an extremely powerful system which is extremely easy to use. Great for live shows, as well as tracking under tight deadlines. It also offers articulation presets which can replace the built-in key-switching with alternative midi triggers such as foot-switches, freeing your left hand for playing notes rather than key-switches.

From now on, you can use any of the Broadway Lites wind instruments multiple times in the arrangement or in a multi, even when playing unison, creating a realistic section of multiple instruments. This means that even with multiple instances of just one instrument, you can still get a realistic section of multiple instruments playing in unison. The feature is not some kind of a doubling effect, but rather it uses different samples, and performs slight adjustments to make sure each instance of the instrument sounds a little different from the other. The results are very realistic. The feature also includes “Humanize” and “Detune” knobs for further control over the section sound.

With version 2.0, “Notation mode” has been added to all of the Broadway Lites instruments, to enable notation programs to communicate with Broadway Lites and use it for playback of scores, including all included articulations and dynamics. The new Notation mode also enables integration with Cubase Expression maps. This was not previously possible due to the unique articulation switching system in Broadway Lites. The new Notation Mode uses an alternative system of key-switching that is more in line with the way notation programs operate. (full documentation in the user manual).

Due to the extended dynamic range of the wind instruments included in Broadway Lites, it is sometimes difficult to keep dynamics under control when using a MIDI keyboard’s velocity. To help overcome this, we’ve added a new knob to control the velocity curve, which helps to adjust the responsiveness of the Broadway Lites instruments to various MIDI keyboards. The new velocity curve control feature can also be MIDI automated to make changes within a song as needed.

For a detailed list of Instruments and Articulations please go to "More Info".