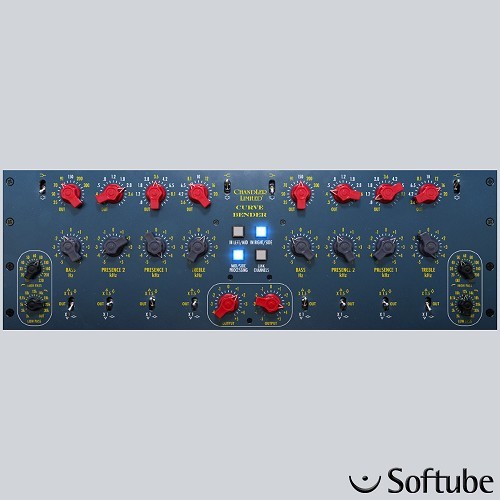 With the Chandler Limited® Curve Bender, Softube offers a legendary mastering equalizer as a native plug-in. The Curve Bender is based on the circuitry of the classic EMI TG12345 mixing console, and the Softube plug-in makes the epochal sound of this historic recording studio technology available in any popular DAW. Curve Bender's four bands per channel plus high and low pass are complemented in the virtual version of Softube by a link function and an integrated MS splitter. This makes the already powerful Curve Bender a versatile and powerful tool for mastering and mixing.

The Chandler Limited® Curve Bender looks impressive: The front panel with three treble units and the powerful chickenhead controls invite you to edit the frequency spectrum. Softube remains true to this concept, but adds more features to the basic editing. Left and right channels can be linked. A particularly potent innovation is the integrated MS matrix, which enables independent processing of the mid and side signals. Especially in mastering, a speciality of Curve Bender, these functions are sometimes extremely helpful.

The DNA of Curve Bender goes back to the equipment of the Abbey Road Studios in London and thus has an enormous influence on music production to this day. The mixing console, whose circuits were adapted for the Chandler Limited® Curve Bender, was involved in the production of real music classics: "Dark Side Of The Moon" by Pink Floyd and "Abbey Road" by the Beatles are just two examples of albums whose lasting success has made the sound of these circuits part of our collective memory. With the plug-in version of Softube, this sound signature is now also available in native DAW systems.

Gentle as effective for masters, groups or individual signals

As a mastering EQ, Curve Bender is particularly suitable for the gentle shaping of a mix. Its exceptional sound characteristics with silky highs, transparent mids and powerful basses are also expressed in a naturalness of expression that can give a mix or a subgroup exactly the necessary glitter. The carefully designed frequency curves allow any kind of intervention from gentle accentuation to strong deformation with sublime sound quality. In plug-in form, Curve Bender also has an additional strength: it can be used on the master as well as on subgroups and even individual tracks because it is available in virtually unlimited quantities.