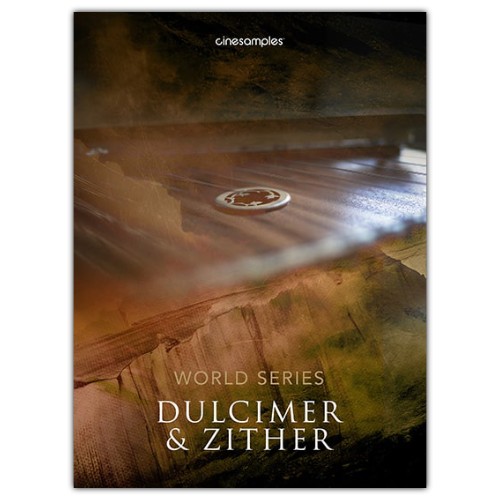 € 149,-
$ 149.00
£ 134.83
hear
see
Update Required To play the media you will need to either update your browser to a recent version or update your Flash plugin.
Related products
More Info
Requirements

Cinesamples is proud to present the new line of libraries - The WORLD SERIES! The first installment introduces the family of the Dulcimer and Zither, a favored instrument color by composers throughout the ages and around the globe. Recorded at the famous Firehouse Recording Studios in Los Angeles, and mixed by esteemed engineer Tim Starnes, the Dulcimer and Zither library will add stunning brilliance and color to any scoring palette.

The Cinesamples WORLD SERIES: Dulcimer & Zither is unmatched in its sound and simplicity due to the choice of instruments and recording technique. The library was designed by composers, for composers, with direct feedback from the film music community during its development. The result is a library that is easy to use, composer-friendly, and sounds professionally mixed right out of the box without being too demanding on studio hardware.

The library was meticulously recorded and engineered by Tim Starnes, one of the most seasoned and sought-after music editors and recording engineers within the film scoring business. He has worked with most of the current and former A-list composers of Hollywood. His credits include productions such as King Kong (2005), The Lord of the Rings II & III (2002, 2003), The Aviator (2004), The Departed (2006), Remember Me (2010), Twilight: Eclipse (2010), Hugo (2011), and Extremely Loud and Incredibly Close (2011). Tim Starnes' presence at the composition, recording, and mixing phases of the score gave him the unique understanding needed to faithfully emulate the sound of Hollywood. After previous successful collaborations such as “Drums of War," Cinesamples is proud to once again be fortunate enough to have him as a recording engineer on this library.

The studios used for Dulcimer & Zither - Firehouse Recording Studios - offer an equally impressive pedigree, having recorded the music for countless movies, TV shows and industry veterans such as Aretha Franklin, Chick Corea, Herbie Hancock, and Randy Newman, among others.

All patches generally contain hits and / or plucks recorded at varying dynamics with up to 10 round robins. Depending on the instrument, we recorded samples using different mallets, hammers, bows, plectrums and finger plucks in several mic positions.

Users can choose from 3 microphone positions - Close, Room, and Full Mix which contains a mix of Close/ Room and additional microphones. We also carefully chose the instruments that were to be recorded in order to ensure the best sound quality.

The most notable choice was the piano dulcimer which was sampled chromatically (10RR) to reproduce the typical stereo image of the instrument. We also auditioned several mallets and made the most useful and artistic choices.

In addition to general GUI functions such as Delay, Reverb, and Envelope Control, we are also introducing our very own Arpeggiator with this library. This feature will give users control over alternate modes of arpeggios, including the ability to sync to the host tempo in the user's DAW of choice.