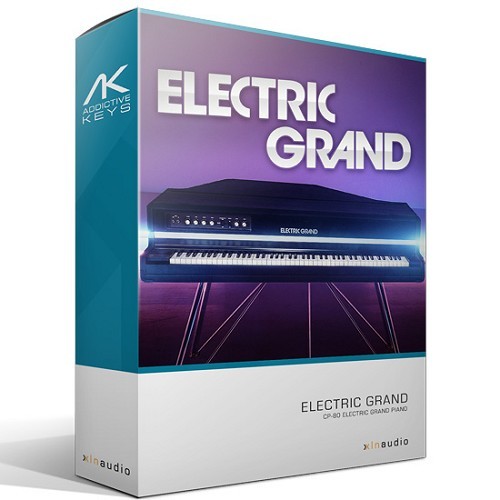 Its recognizable sound can be heard on countless records from classic artists like U2, Peter Gabriel and ABBA, as well as contemporary acts like Keane and Miike Snow.

This member of the Addictive Keys family combines three distinct characters in one instrument: The acoustic sound of hammers hitting strings, the direct line signal from the built in pickups, and finally a crunchy amped sound to add some grit to the mix. This makes the Electric Grand very versatile and suitable for just about anything from indie rock and pop to house to R’n’B ballads.

The included ExploreMaps and presets cover everything from clean studio setups to swirling synthetic textures. This instrument was cutting edge 30 years ago and we’ve made sure it’s cutting edge today.

The full Addictive Keys engine is included with all instruments - start with any one of them or add to your existing collection! The Electric Grand features a meticulously sampled Yamaha CP-80, an electro-acoustic instrument produced from the late 70’s through the mid 80’s. An electric grand has hammers and strings like an acoustic piano and a body like a small grand piano. What makes an electric grand different is the amplification, which is done with pickups under the strings. This is similar to an electric guitar or bass, and the direct line signal actually sounds something like a blend of an electric bass, electric guitar and a piano! This makes for some unique textures and works really well where you might otherwise have used a more traditional piano sound. The Addictive Keys engine can of course simulate the original instrument’s built in tremolo and tone controls - and much more.

Our approach was to capture everything this instrument has to offer and more. We recorded the direct line signal completely clean, as well as in stereo through a vintage Roland Dimension-D hardware chorus. For the amp setup we used a Music Man 112 RD tube combo amp with three close microphones in mono and one ambience microphone in stereo. The Yamaha CP pianos were made for touring musicians. They were easier to move than a real grand and faster to setup on stage, using the line signal from the pickups instead of microphones. Although rarely used, we really love the acoustic sound of this instrument too, so we recorded that as well. A total of seven different setups in mono and stereo were recorded and are available as selectable perspectives in Addictive Keys.

The virtual room shows all available sources and their placement, as they were when the recording took place. This serves as a visual reference for the available and currently used microphone perspectives and inputs, but also as a microphone selector. The Electric Grand was recorded with seven different setups and by being able to see their placement it makes it easier to build the right sound for your production - from mono to stereo and from close to far, lined, amped or acoustic. 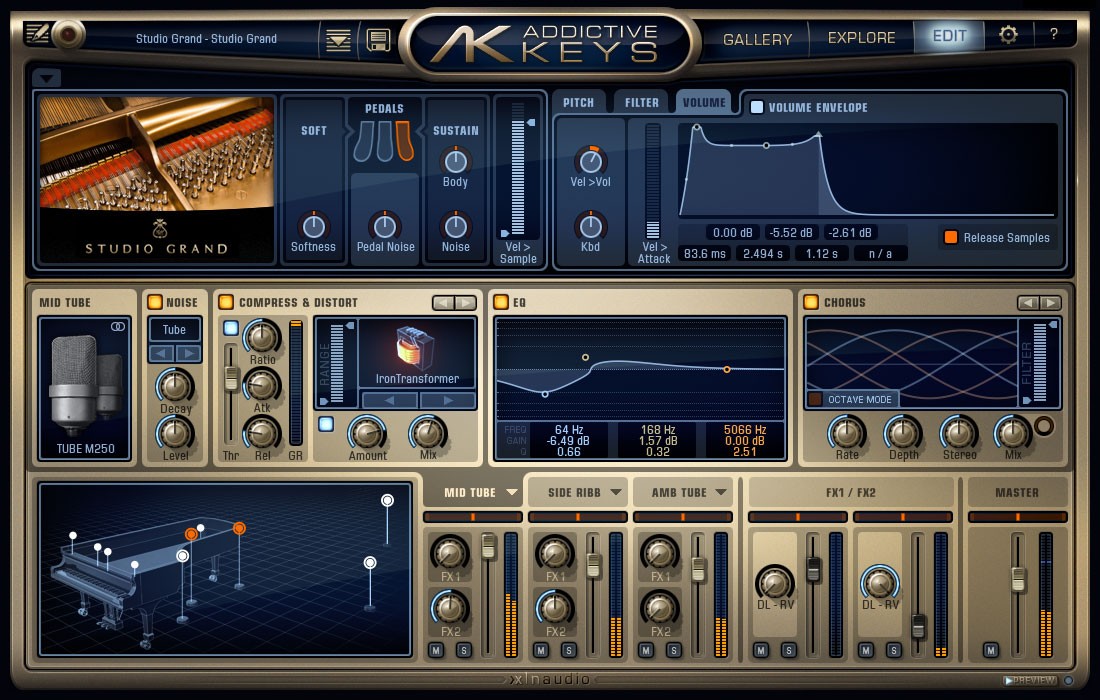 The Electric Grand differs from a real grand piano by only having a sustain pedal. We added the Una Corda and Sostenuto pedals as a special feature, providing playability similar to a grand piano.

Softness: Adjusts the instrument softness when the soft pedal (Una Corda) is pressed.

Pedal Noise: Adjusts the volume of the pedal noise.

Sustain Body: Adjusts the amount of body resonance in the instrument while the sustain pedal is pressed. The more you add, the “richer” the sustain tone will sound.

Sustain Noise: Adjusts the amount of string resonance for all strings in the instrument while the sustain pedal is pressed, adding a natural noise within the instrument.

Velocity to Sample slider allows you to filter out the lowest and/or highest velocity layers of the current instrument, while keeping the dynamic range intact.

The Addictive Keys engine is free and included in all offers. The installation and authorization of the Electric Grand requires an internet connection on your audio computer, and is handled by the XLN Online Installer application – available for download at: www.xlnaudio.com/install