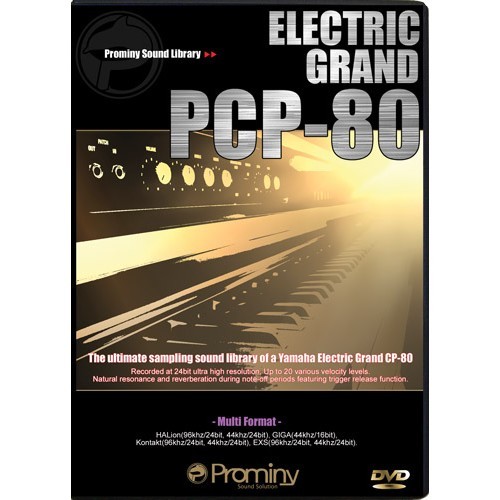 
The Yamaha Electric Grand CP-80 was manufactured by the Yamaha Corporation in 1976. Musicians who love rock, progressive rock, fusion, jazz, funk and various types of music love the characteristic warm piano sound of the Yamaha CP-80. This electric piano is considered among the top in standards and is a "must-have" musical instrument.

A huge number of albums and musicians feature the CP-80 on their productions. These musicians include George Duke, Michael McDonald of the Doobie Brothers, Eddie Jobson in UK, and Peter Gabriel in Genesis. They love its characteristically unique, sharp attack piano sound. Adding a chorusing effect or blending this piano´s timbre into a mix of acoustic and electric instruments adds a luscious sound to any project. The production possibilities are endless.

When you touch a key of the CP-80, the inside hammer strikes directly at the internal tension string. Its structure is mechanically similar to that of a classic acoustic piano. The CP-80fs structure is unique because of the pick-up-microphones installed near these strings to receive the sound. There are 88 pick-up-microphones for each of the 88 keys in this keyboard.

The CP-80 looks cool and has an excellent sound. But it´s also very hard to maintain and keep in good condition because of its mechanical structure.

The CP-80 is a very sensitive device to tune. It detunes easily when moved, there´s a change in temperature, or a change in humidity. In the worst case, the internal tension strings could break. It takes an expert tuning engineer to tune perfectly.

Transporting the CP-80 is not easy. The keyboard is disassembled into two sections of which each section weighs a hefty 200 lbs.

The Prominy Sound Library "Electric Grand PCP-80" is the ultimate answer to all of the difficulties listed above. If you have a computer installed with our library, you can play the Yamaha CP-80 anytime, anywhere. This library is suitable for a wide range of musical genres and especialy highlight music from the 1970´s through the 1980´s. You can create modern, emotional, and nostalgic atmospheres for your music for the fraction of the price to own this beautiful vintage keyboard.