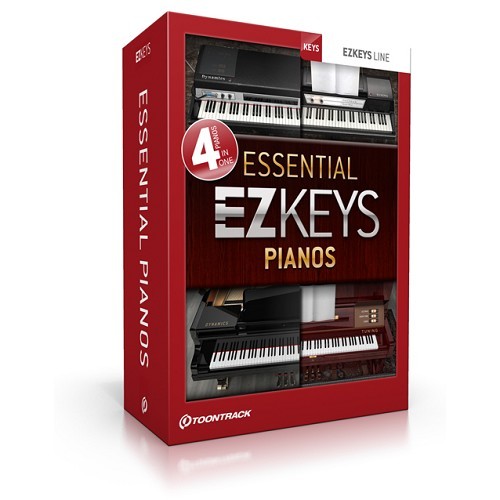 This bundle combines the revolutionary EZkeys software with four pianos from the EZkeys Line. Included are four equally iconic as essential instruments in any studio´s or songwriter´s toolbox; the timeless grand piano, the intimate upright as well as two of the world’s most defining and characteristic electric pianos, the Rhodes MK I and the Wurlitzer 200 A. The Essential Pianos bundle has the sounds you need for anything from epic classical compositions and intimate jazz sessions to rock, pop and soul.

• EZkeys Grand Piano
EZkeys Grand Piano comes with a Steinway and Sons model D grand piano, sampled to perfection in a world-class recording studio using only the best of the best in vintage and modern recording gear. The model D grand piano is the undisputed industry standard among performers and producers worldwide and has over the past century and half had an overwhelming amount of musical history and heritage created on it. The sounds were mixed to sit perfectly in a production environment without any additional tweaking. There is also a selection of ready-made and user controllable presets available, making your sound options seem almost endless.

• EZkeys Upright Piano
The EZkeys Upright sound library is a carefully sampled Östlind & Almquist piano. This classic and award winning Swedish brand dates back to late 1800s and delivers a characteristic, rich and warm tone unlike any other instrument of its kind. It was sampled in painstaking detail at a world-class studio using only the best of the best in modern and vintage recording equipment.

• EZkeys Classic Electrics
EZkeys Classic Electrics comes with two of the world´s most defining and characteristic electric pianos, the Rhodes MK I and the Wurlitzer 200A. These instruments have been the voice of several generations and immortalized in classic songs spanning any genre from funk to soul and jazz. Captured in painstaking detail by top of the line equipment, the Classic Electrics libraries combine second-to-none playability with world-class sounds, making them just as perfect for the stage as the studio.

EZkeys is a revolutionary plugin and stand alone instrument that combines a world-class piano player, songwriting partner, arranger and a meticulously sampled instrument - all in one package! Aside from breathtakingly rich tonal qualities, EZkeys allows the user unlimited creativity through its groundbreaking functionality.