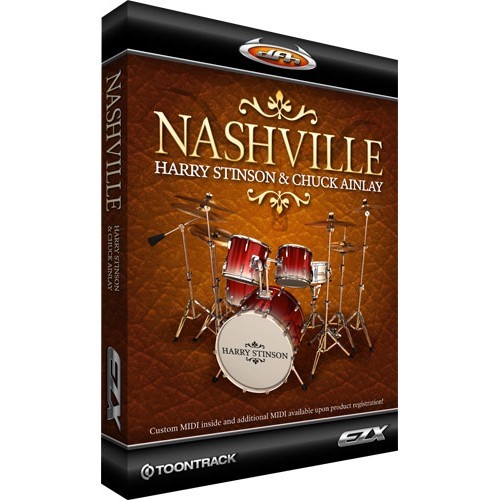 The Nashville EZX for EZdrummer takes the traditional country heart of Nashville as a starting point but branches out to become something bigger. A library of percussive sounds that will appeal to musicians, writers and producers in every musical genre in need of EZ access to great drums. The EZX takes dfh EZdrummer to new levels, delivering unprecedented high-end quality content mirroring the melting pot of writers, performers and producers from Hip-hop to Bluegrass that is the Nashville music scene of today.

Nashville EZX drummer Harry Stinson is a Grammy nominated drummer and award winning producer, writer, and singer having achieved No. 1 status in all of those categories. His talents have been shared with artists like Steve Earle, Martina McBride, Johnny Cash, Faith Hill, Earl Scruggs, Etta James, Brooks and Dunn, Patty Loveless, Lyle Lovett and numerous others.

Nashville EZX producer Chuck Ainlay is a Grammy winning Producer/ Engineer with a mind-blowing track record. To name but a few, artists such as Mark Knopfler & Dire Straits, George Strait, Trisha Yearwood, Vince Gill, Sheryl Crowe, Emmylou Harris, Steve Earle, The Mavericks and Dixie Chicks have all relied on his experience and expertise to guide them to the perfect sound. The Nashville EZX was recorded at Soundkitchen - Nashville.