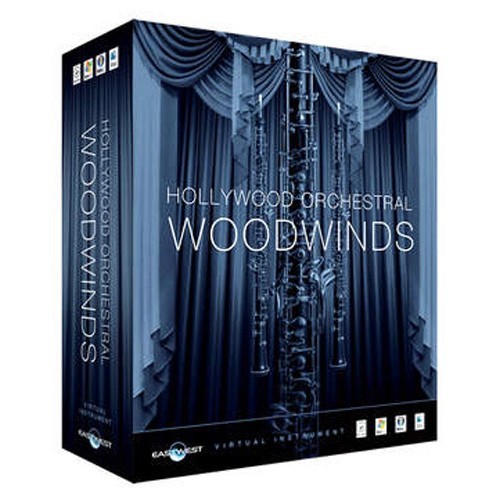 (1)
€ 149,-
$ 149.00
hear
Update Required To play the media you will need to either update your browser to a recent version or update your Flash plugin.
Related products
More Info
Reviews
Ratings
Awards
Requirements

From ACADEMY AWARD, C.A.S. (Cinema Audio Society), BAFTA, and EMMY award-winning sound engineer SHAWN MURPHY, who has recorded and mixed the scores for more than 300 feature films including Indiana Jones and the Kingdom of the Crystal Skull, Star Wars: Episode II - Attack of the Clones, Star Wars: Episode III - Revenge of the Sith, Star Wars: A Musical Journey, Jurassic Park, Jurassic Park The Lost World, Harry Potter and the Prisoner of Azkaban, Titanic, Minority Report, The Bourne Ultimatum, Saving Private Ryan, Munich, The Passion Of The Christ, X-Men: The Last Stand, and Ice Age, etc., Hollywood Orchestral Woodwinds is the third installment in the Hollywood series, and was designed to be the most detailed collection of orchestral woodwind instruments ever assembled.

Hollywood Orchestral Woodwinds gives you complete control over the players and includes:

But most importantly check out our articulations chart at "more infos"  which really shows how far we went to create the ultimate orchestral woodwinds library. No Shortcuts here!!

Majority of the Hollywood Orchestral Woodwinds instruments include the following:

Hollywood Orchestral Woodwinds Gold Edition is 16-bit, with one mic position (Mid) and all articulations.

Excerpt:
Hollywood Orchestral Woodwinds stands positively out from the competition, HOW is a very solid product that does not suffer from any of the "teething troubles" (such as background noises) that other products still have to overcome. In addition, HOW offers a wide assortment of instruments. The HOW Gold Edition provides all of the instruments to those with a smaller budget (without the alternate microphone positions) – and the competition doesn't offer this possibility at all. TOP PRODUCT AWARD for a complete, well thought out, through, and professional library.

Hollywood Orchestral Woodwinds covers all the orchestral bases by providing 13 solo woodwinds, including two flutes and specialist instruments not found in other libraries. A large articulation menu covers all stylistic needs, from subtle, sumptuous sustains and legato melodies to driving, dynamic short notes and fast scale runs. Beautifully recorded from five microphone positions by the award-winning Shawn Murphy, the timbre of some instruments takes the breath away, and collectively they will add sheen, depth and orchestral authenticity to your arrangements.