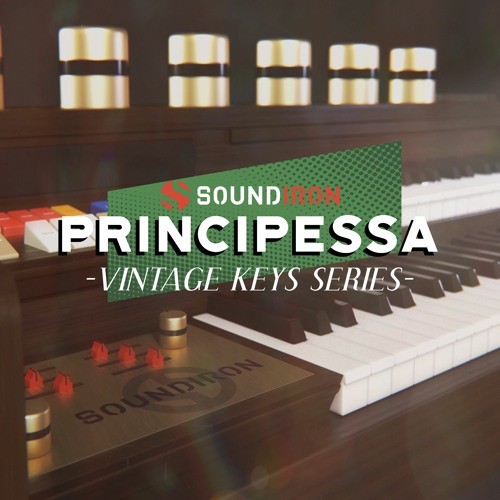 € 29,-
$ 29.00
£ 25.77
hear
see
Update Required To play the media you will need to either update your browser to a recent version or update your Flash plugin.
Related products
Requirements

A Vintage 86-Key Synthesizer for Kontakt

Soundiron's Principessa library captures the vintage sounds of the classic and very rare "Princess" organ. This 2-tiered electric organ was manufactured in the late 60s or early 70s by Welson, a now long-forgotten Italian instrument maker that was once known for its organs and guitars. Principessa has a rich analog synthesizer tone with creamy low + midrange and soft rolled-off highs. The upper and lower keyboards have 43 keys each, starting on E and ending on B. The console also features a short range of bass pedal keys, an expression pedal and various rocker switches for unique voice and effect settings. Its internal amplifier powers a pair of internal speakers, along with a built-in rotating speaker for vibrato effects.

Soundiron packed the GUI with lots of great sound-shaping controls that give you the flexibility to warp the sound in many ways. You have control over Volume, Attack, Release, Transient Offset, Vibrato and Octave layering. The "Glide" control slider allows you to play legato and portamento leads. You’ll also find an adaptable LFO system, with selectable LFO shape, modulation target parameter, speed, intensity, tempo-syncing and fade-in time. You can also apply your choice of 13 lowpass, high-pass and FX filter, with assignable modulation con-trol options, including velocity, modwheel, expression, after-touch, key position and step-sequencer table control. You can also use our customizable arpeggiator, with a built-in velocity sequencer table and control over arp direction, note timing, swing, randomization and duration.

Principessa was recorded in a dry studio using a pair of Neumann TLM 103 large diaphragm microphones. We recorded its stock presets with sustains and staccato samples for each key. The included octave, vibrato and FX rack give you an easy-to-use interface to completely customize and shape its fat analog sound to fit a variety of creative styles.