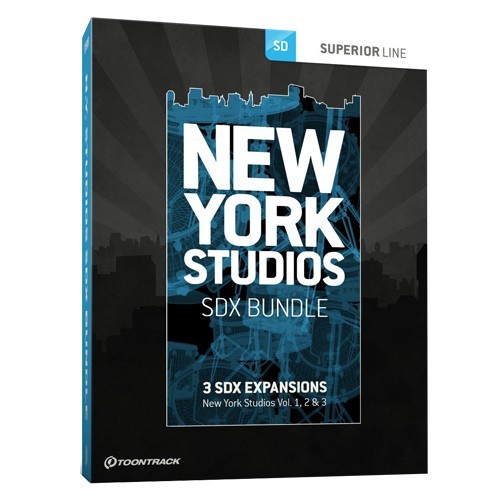 The Complete Superior Experience for SD3

This collection comes with the full core sound library from the now discontinued Superior Drummer 2 as well as two SDX expansions from the same series, the New York Studios Vol.2 and Vol.3 SDXs. The focus of the series has been to capture the most notable and legendary drum rooms in the New York area: Allaire Studios, Avatar Studios and The Hit Factory. Having housed acts like Aerosmith, Bon Jovi, Journey, Kings of Leon, The Clash, Stevie Wonder, U2, Paul Simon and Michael Jackson over the past several decades, all three studios have left vivid footprints in modern pop and rock history. Sadly, two of these landmark facilities have since closed. In that respect, these drum libraries are historical documents of their unique sonic identity.

This collection is the perfect palette to use when crafting drum tones for anything from loud and reverberant to soft and intimate – something only perfectly crafted drum rooms can facilitate. Combined with the abundance of sound shaping and sound design tools available in Superior Drummer 3, this collection of drums offers a near endless palette of drums to shape into your mixes.

To use this product, an installed and activated Version of Superior Drummer 3 (or higher) is required.