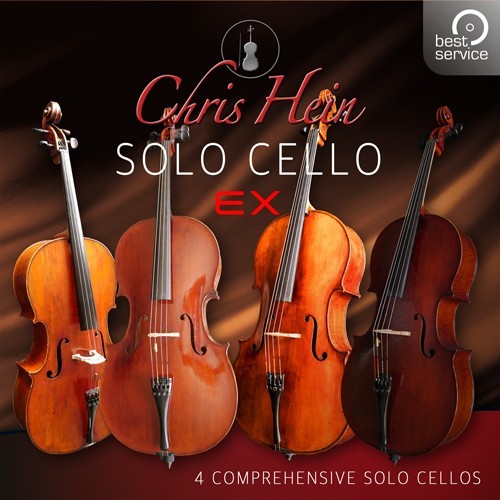 Chris Hein – Solo Cello EXtended outshines all previous Cello libraries. Never before, a sample library of this extent has been dedicated towards a single string instrument: Recorded with greatest care and endless details, precisely edited and merged into a practical and musical instrument for NI's Kontakt Player offering an elaborated custom-tailored user-interface with comprehensive scripting. Chris Hein – Solo Cello features high-grade sound quality and incredibly realistic articulations. This library offers everything you have been missing out on previous virtual string instruments.

You receive over 30,000 samples, up to 38 articulations, four different legato transitions as well as extensive phase-alignment of all samples to guarantee smooth inaudible crossfades of up to eight velocity layers. This feature-set allows the creation of unparallel, authentic cello-arrangements on a computer.

This library benefits from producer Chris Hein's 30 years of experience in the field of sampling and library production, resulting in a product offering highest versatility, configurability and practical use.

Chris Hein - Solo Cello EXtended is a bundle of four fantastically sounding Solo Cello Instruments, all with a unique sound and played by professional studio musicians. All instruments have been recorded with great care and detail. Their virtual counterparts have been further optimized for playability and performance (EX instruments), thus saving your computer resources and still granting you access to all required articulations for authentic performances.

The following instruments are included:

Chris Hein – Solo Cello EXtended delivers outstanding, detailed and highly expressive results as a solo instrument or as part of an ensemble – in all relevant genres ranging from classical music and film scores to gypsy-jazz, folk and pop ballads.

And there is even more: Chris Hein – Solo Cello EXtended provides sound-designers, composers of film- and game soundtracks and experimental musicians with special effect-sounds and uncommon articulations with exceptional dynamics, such as flautando, flageolets and ponticello. The special effect sounds are further supported by the internal tenfold DSP-effects-rack. Feel free to create complex sound clusters, dense atmospheres and surreal sonic worlds out of a single Cello for incredible moments of suspense.

By using the Ensemble Maker, the two solo instruments can easily be turned into an ensemble with the advantage of all available articulations. A voice division in the stereo image and fine detuning intensifies this effect.

Chris Hein – Solo Cello EXtended equally satisfies demanding string instrument enthusiasts as well as composers who not only expect excellent samples but also comprehensive details, a wide range of articulations and a versatile adaptation to their preferred workflow.

On one hand, the instrument offers an extensive set of samples, with every articulation mapped on your keyboard. On the other hand it can also run in a low memory consuming mode, due to its modular concept and its significantly reduced variations, resulting in faster loading times.

By using the clean start configuration, the instrument is initially loaded in a sustain variation. Further articulations and functions can simply be added at any time if needed. That way you can work on compact and mobile systems with a lot less memory available just as fluently and efficiently. 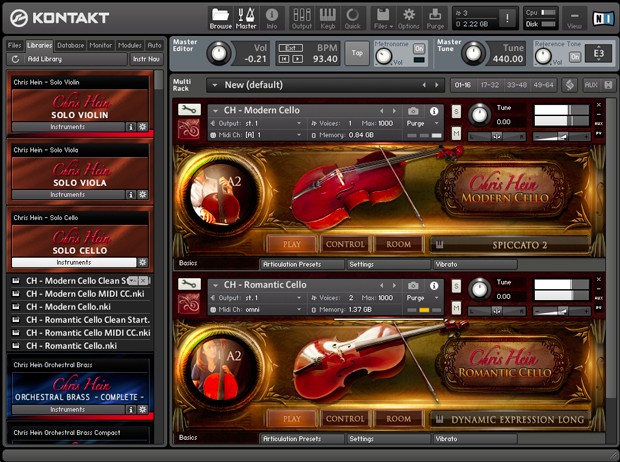 As with all his productions, Chris Hein decided to go for close mic'ing in a dry recording environment. Combined with the twin impulse response based reverberation sections, the intentional dry sound of the library enables adapting and fitting of the instrument perfectly into variable contexts. Dedicated convolution engines for the instrument's body and the room itself allow creating nearly arbitrary acoustic environments ranging from intimate closeness to large concert halls. In difference to the fixed acoustics of several competitive products, Chris Hein – Solo Cello EXtended is sonically exceptionally variable and additionally easy to combine with almost any other library being offered.

Over a research period of several months, all samples had been fully aligned in phase. Accordingly, the instrument offers perfect, seamless transitions of dynamic layers without sonic degradation.

The combination of long and short notes is a major problem in sample-libraries that often fail to deliver authentically sounding results. With real musical instruments, the note length often influences the attack behavior as well as the note end. Chris Hein – Solo Cello EXtended addresses these aspects by its "Note Head Designer" which we significantly expanded for this library. It offers a selection of 102 attack shapes. This allows calling up twelve matching short sample variations (Shorts) along with each sustain-articulation. These shorts not only offer the corresponding correct attack-behavior but also a note-end that perfectly matches the note length.

These user-defined selections of short-note-variations are available in eight dynamic layers each and can be combined with the corresponding sustained phases, leading to astonishingly realistic results that cannot be achieved using random round-robin based selections. Of course, the shorts are also available as individual articulations. 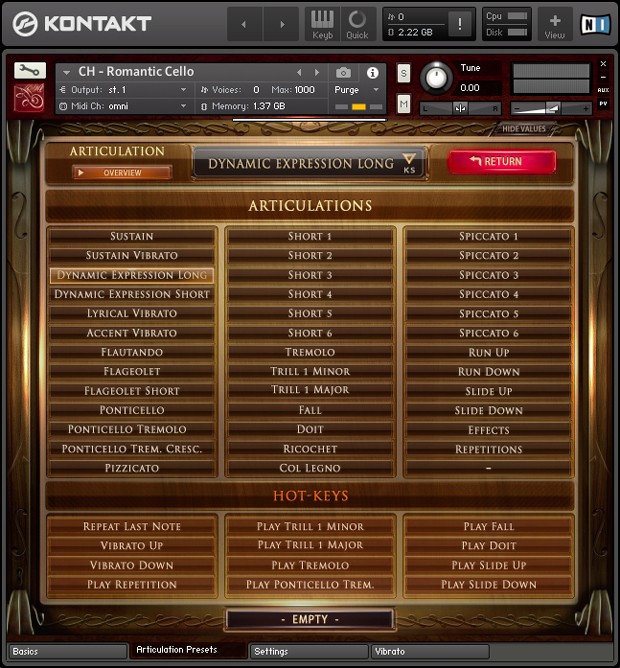 Chris Hein – Solo Cello EXtended offers true legato in up to four dynamic layers for short and long note variations. The corresponding in-depth recordings and edits result in unexpectedly realistic sounds with perfect note-transitions. At the same time, it is possible to combine these realistic combinations with additional artificially inserted legatos.

The performance-data of Chris Hein – Solo Cello EXtended directly reflects the immense investment in recordings and configuration possibilities. The instrument builds upon over 30,000 single samples, up to 38 articulations and up to eight dynamic layers. This makes the library one of the most in-depth sampled Celli currently available.

The custom-tailored user-interface of the Kontakt Player not only offers numerous functions to adapt the library's sound character and articulations but also provides immense configuration choices to live up to specific demands and workflows. At the same time, due to pre-programmed key-switch-presets at the lower part of the keyboard, the library can also be effectively played without any need for deep edits. Thanks to four "Dynamic Modes", the "Note-Head Designer", "Key-Vibrato", "Hot-Keys" and the revolutionary concept of articulation-presets, the user-interface will give you the impression of actually plaing this instrument live. 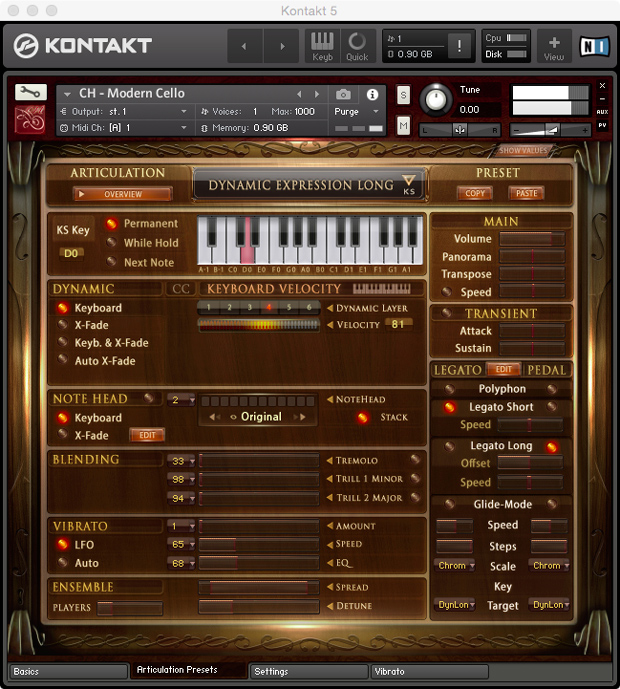 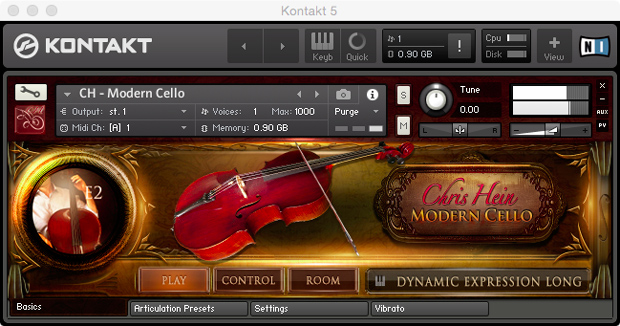 I played some simple lines with no additional programming and sent them to my friend, a cello player, and he was very pleased with results. Solo Cello is as real as a real instrument can be. It isn’t cheap, but I can’t remember any other instrument where you can get so much for the asking price. It brings a top-quality instrument (actually two different instruments where each has its own character), an impressive number of articulations and even more impressive tools to liven up all those articulations. The endless number of controllers are ranked in quite a logical order. All in all, I was impressed with the first Chris Hein instrument that I got years ago and have to admit that his instruments have become better and better. Watch the video clips on the Best Service site carefully and try to find any moment in this complex performance that sounds fake. Maybe I’m not the most astute listener, but I couldn’t find any – way beyond impressive!

I know that it would be nice to find at least one weak spot, to make this review a bit more credible, but I’m a big fan of the cello and this library is a dream come true for me. It is so playable and sounds so good, that even if I could find any weak spot it would probably be totally irrelevant. At some moments Emotional Cello from Best Service might sound a bit more emotional, but this one can recreate everything that a real cello can, no matter how complex and dynamic performance it is. Even more important, at least for me, it sounds consistent and well-defined even in a crowded mix, and on the other hand, it is impossible to recognize it as a virtual instrument even when it plays solo. With a little skill and experience you can get very impressive results with minimum effort.