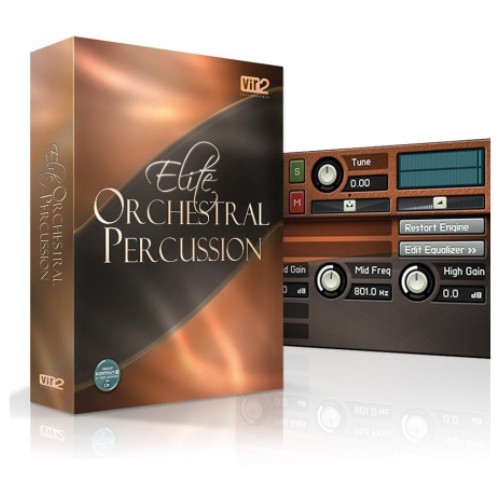 The premier orchestral percussion library for a new generation of composers

Elite Orchestral Percussion features a number of cutting-edge techniques to maximize and enhance the playability of the library, including a randomization engine which utilizes a variety of advanced techniques to maximize realism. A full performance view is available in all instruments, enabling instant triggering and programming of various common percussion articulations such as flams, 3-stroke ruffs, chokes, rolls, and realistic rhythmic pattern generators.

Elite Orchestral Percussion offers dozens of different room and reverb options via a custom set of convolution impulses implemented in EZRoom. EZRoom is a drop-down menu in the interface that, with one click, allows you to place the percussion in everything from the world´s greatest chapels and concert halls to caverns, chambers, and small rooms, all with minimal processor hit and no additional RAM usage. Unusual sonic spaces are also included for esoteric effects. EZRoom multiplies the different sonic options available to the discerning orchestral writer.

Elite Orchestral Percussion boasts an impressive array of features built into its engine, designed to provide the best in realism, flexibility, and creative inspiration.

An integrated Humanize engine offers a breakthrough dimension in realism. The scripting engine underneath Elite Orchestral Percussion will intelligently vary the pitch, timing, and volume of each hit by minuscule amounts to increase the diversity of timbre produced. Each aspect of the Humanize engine, from extreme effects to complete bypassing, can be controlled by the user.

EZRoom is an integrated convolution reverb option, allowing the user to instantly place the percussion instruments in one of more than fifty different custom sonic spaces; everything from chapels and halls to caverns, small rooms, and unique esoteric spaces is included. When EZRoom is activated, new knobs for dry and wet levels appear, allowing full control over the level and balance of the convoluted sound.

Furthermore, Elite Orchestral Percussion allows for the creation of rhythmic patterns which are triggered by the engine. Up to 25 user patterns can be programmed in each instrument, and some prebuilt patterns are included in each instrument by default. The pattern engine is capable of everything from traditional patterns to wild and unusual synthetic effects, all of which lock instantly and perfectly to host tempo.