(10)
€ 235,-
$ 299.00
hear
play
Update Required To play the media you will need to either update your browser to a recent version or update your Flash plugin.
Related products
Reviews
Ratings
Requirements

The Steinway B is one of the most recorded pianos in history and is widely considered the ideal studio piano. Its unique balance of size and power make it an extremely versatile instrument for all styles of music. This particular instrument was hand selected and prepared with the kind cooperation of Steinway & Sons® at their factory in Astoria New York.

Before recording, all piano regulation, voicing and tuning was done on-site by a Steinway concert technician before painstakingly sampled by Synthogy’s expert team. The recording sessions took place in the classic tuned live room of Power Station NE, an acoustic replica of the famed Power Station New York.

This Bösendorfer 225 Grand Piano possesses a deeply resonant tone and balance in all registers and has a distinguished place in the history of recorded music. Slightly longer than most studio grands at 7' 4", and with four additional low keys, this instrument has appeared on numerous Grammy®-winning and Grammy-nominated recordings. The sessions were engineered by Tony Shepperd in the state-of-the-art Studio A at Firehouse Recording Studios in Pasadena, its venerated sound captured in this historic piano room. 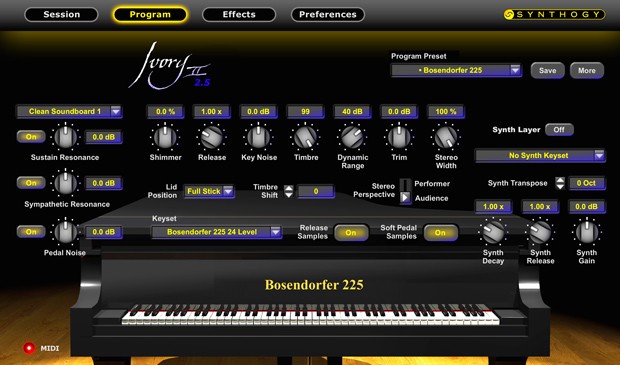 Ivory II-Studio Grands will be the first Synthogy piano collection to ship with their new Ivory 2.5 Piano Engine. This update will support PACE’s machine-based license authorization scheme as well as the traditional PACE iLok™ key.

Additionally, the Ivory 2.5 Piano Engine includes new features, such as: 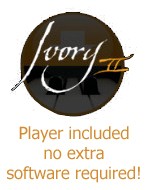 With the Synthogy Ivory 2.5 or later Piano Engine you can use the PACE computer based activation or the traditional PACE iLok™ Key activation. Previous Piano Engine versions always need and iLok™ key.