"The entire line of EastWest instruments are an essential part of my composing rig. The sounds are impeccable and naturalistically captured while the ease of use and the power of the PLAY engine makes the instruments top of their field." 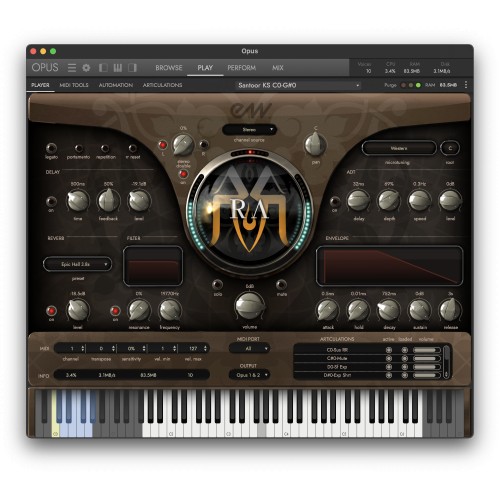 "Quite simply, RA is the best collection of world or ethnic sampled instruments I´ve ever used. It ought to be of particular appeal to TV and film composers." - SOUND ON SOUND

Quantum Leap - RA - PLAY Edition, THE DEFINITIVE RARE AND ETHNIC VIRTUAL INSTRUMENT, now available with PLAY’s intuitive custom interface with more control over the sounds offered in the collection along with the ability to load even more instruments than ever before.

In addition to PLAY’s intuitive custom interface, Quantum Leap RA - PLAY Edition includes many other features, such as:

The instruments featured in the PLAY Editions are newly-programmed for PLAY from the original recordings. 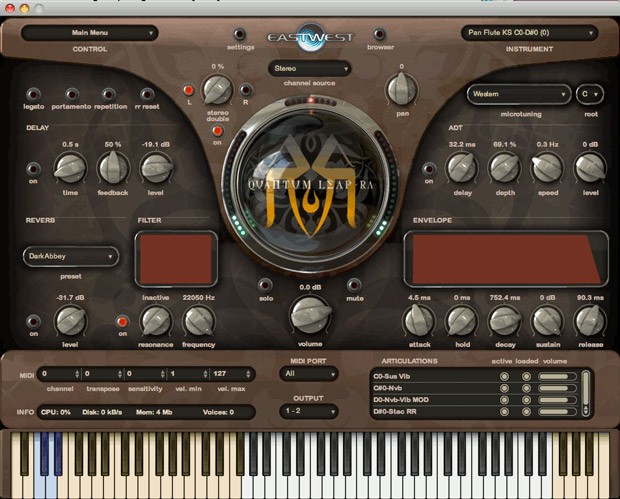 Quantum Leap RA - PLAY Edition provides composers with access to a variety of rare and unique instruments from Africa, Europe, India, the Americas and Australia, the Far East, and the Middle East and Turkish Empires. Musicians will find that RA has an amazing sound quality and they’ll marvel at the articulation of each instrument which has a wide range that goes from controlled to expressive. All of the instruments and ensembles featured in the collection were sampled extensively as a means of preserving the true character and expression of each instrument. For the first time with the Quantum Leap RA - PLAY Edition, users will have more control over the sounds offered in the collection along with the ability to load even more instruments than ever before

“With ethnic instruments, the key to authenticity of sound is expression,” says Quantum Leap Producer Nick Phoenix. “Now with the incorporation of our advanced PLAY sample engine, with its built-in sensing technology that monitors a player’s style and adjusts the software and sounds accordingly, users will experience a level of detail that was lacking in other products in the market, making their projects come to life with range and emotion.”

Details:
In ancient Egypt, RA was regarded as the creator of everything, the god of the sun. RA is usually represented with the body of a man and the head of a hawk, holding an ankh & sceptre. The chief location of RA worship was Heliopolis (a Greek word meaning city of the sun). RA is an appropriate name for the largest, and most comprehensive rare and ethnic virtual instrument ever made.

RA was born a few years ago, as a sample library called “Rare Instruments.” All of the sounds from Rare Instruments are included in RA, but this only represents approximately one-tenth of the content. The other ninety percent of RA was recorded at a top studio in Hollywood. Because of the size and complexity of the project, I brought in two talented producers, Pacemaker and Tony Austin to co-produce RA with me. They have worked on some other Quantum Leap projects and had some great ideas for RA. We spent time hunting down the best ethnic artists on the West Coast. Los Angeles is so ethnically diverse and blessed with excellent institutions like Cal Arts, it is actually the ideal place to record a rare and ethnic collection.

You will find RA has amazing sound quality. RA was captured with a phase accurate 8-mic setup that gives a complete 3 dimensional image of the instrument. It is this type of sound that takes to artificial or sampled reverb extremely well. The sound is clear and broad. Mics used were Neumann U67 (U47s as alternates), Neuman M50, AKG C12 and Shoepps.

Another cool aspect of this virtual instrument is the fact that we recorded ethnic ensembles. This was done with African drums, bagpipes, gamelan and a Middle Eastern string section. The sound of these ensembles cannot be realistically simulated by layering solo instruments.

RA was a very expensive project, but well worth the cost. A lot of thought went into selecting instruments that would appeal to composers of all types, from dance music, to film. You might want to put the middle eastern string section in your next pop tune, or the hardanger fiddle in a sweeping romantic score ala LOTR.

You might also be surprised at how little percussion is included in this giant ethnic collection. The reason is, we already covered much of this in Quantum Leap Stormdrum. Stormdrum is the ideal companion to RA. The percussion in RA compliments Stormdrum perfectly.

You can have a lot of fun with RA. The possibilities are simply endless, especially when you mix the sounds of different cultures together. Load up the middle eastern string section, apply an Indian or Egyptian tuning from the micro-tuning presets and play octaves. Make a really cool groove with the didgeridoo fx and the Vietnamese jaw harp. Take a classical filmscore piece and replace all of the instruments with their ethnic counterparts: strings with middle eastern string section, solo violin or cello with electric baritone violin, hardanger fiddle or erhu, french horn with alpenhorn, flute with dizi, oboe with duduk, percussion with taikos and African percussion, harp with kora, trombones with rag dung etc. etc.... Or perhaps try the hurdy gurdy, hardanger fiddle, washburn guitar, mandolin and the dizi and make an interesting folk ensemble or the gamelan ensemble with the ney flute, duduk and esraj. And don’t forget the reverb!

"The entire line of EastWest instruments are an essential part of my composing rig. The sounds are impeccable and naturalistically captured while the ease of use and the power of the PLAY engine makes the instruments top of their field."